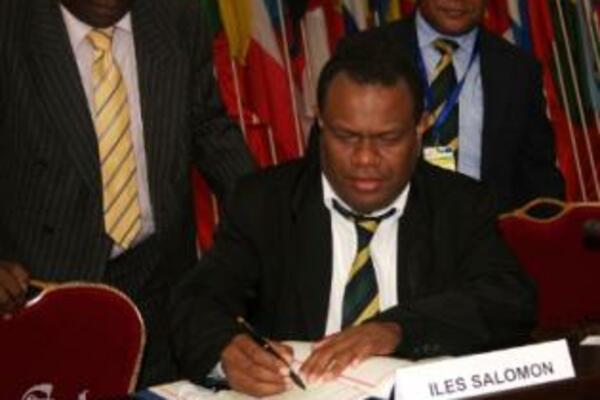 Solomon Islands' Minister of Planning and Aid Coordination, Hon. Steve Abana last week signed the Second Revised Cotonou Agreement in a historic event in Ouagadougou, Burkina Faso, at the close of the 35th Session of the ACP-EU Council of Ministers.

Mr Abana was amongst the first ACP leaders to sign the revised agreement in a colorful event witnessed by hundreds of ministers, ambassadors and senior officials from the ACP and EU countries.

Mr Abana said that it was a historic event and being amongst the first ministers to pen the agreement showed the depth in the relationship the government of Solomon Islands has with the EU.

He added that it was a special event for the people of Solomon Islands as the revision was launched during its Presidency of the ACP Group early last year.

The minister stressed that Solomon Islands maintains a cordial and strong relationship with the EU, which remains the single largest multilateral donor partner in the country's development endeavors through successive European Development Fund resource packages.

In September, Solomon Islands will receive EURO 15.2 million under the vulnerability-flex facility, for which Minister Abana recently signed instruments with Ambassador Aldo d'Arricio, the EU Representative to Solomon Islands based in Port Moresby.

This is an assistance package to cater for difficulties caused by the recent global economic and financial crisis. This assistance will be delivered through the budget support process which Solomon Islands and the EU had worked on together recently to establish as a mechanism for delivery of assistance programmes.

A mid-term-review of Solomon Islands cooperation with the EU under the 10th EDF, which is the main cooperation programme facilitated under the auspices of the Cotonou Agreement, is being finalized with possibilities to adjust the Country Strategy Paper for cooperation. Where feasible, need for additional resources to the national indicative programme managed by the Ministry of Planning and Aid Coordination will be made.

Mr Abana's signature of the agreement came after more than a year of negotiations between Ministers and senior officials from the ACP Group of States and the EU.
At the 91st Session of the ACP Council of Ministers that took place a few days earlier in Ouagadougou, which Abana also attended, the ACP ministers gave their approval on the revised agreement and commended the ACP Committee of Ambassadors for successfully negotiating with the Europeans.

The President of the ACP Council of Ministers, His Excellency Mr. Paul Bunduku-Latha, the Gabonese Deputy Minister to the Ministry of Economic Planning, Trade, Industry and Tourism said the signing of the Second Revised Cotonou Agreement in Ouagadougou signified a rewarding relationship that has grown from strength to strength and spans over 30 years.

Mr Bunduku-Latha and H.E Ms. Soraya Rodriguez, Secretary of State for International Cooperation of Spain (EU Presidency), presided over the signing ceremony. Ministers and government representatives from the ACP and the European Community signed the revised agreement.

Mr Bunduku-Latha said that for the past year - both sides had looked and scrutinized in fine detail, the Cotonou Agreement in the revision process to meet the difficult challenges and cope with shifting trends in a fast challenging world.

The revised Agreement, amongst other things, addressed a number of important issues between the two parties. One of them is the need to expedite progress towards the attainment of MDGs as well as aid effectiveness and global challenges such financial market shocks. It also emphasizes the link between peace and security and poverty reduction and peace and security. The provisions on humanitarian assistance have been improved to emphasis not only responses to emergency situations, but also support for ACP States' efforts in disaster risk reduction and post conflict reconstruction and rehabilitation.

"Our believe is that the revised agreement will help to fight against poverty and assist in our efforts to achieve sustainable development and help to mobilize the international community to attain the MDGs," the ACP President, Mr. Bunduku-Latha said.

The Secretary-General of the ACP Group, Dr. Mohamed Ibn Chambas, said that the signing marked an important development of the ACP-EU relationship - reiterating that the revision was not simply about changing words in a document. Rather, it was about improving an agreement whose implementation would grant better opportunities and positive outcomes in the lives of the ACP people.

The Cotonou Agreement is a treaty between the European Union and the ACP states. It was signed in June 2000 in Cotonou, Benin, by 79 ACP countries and the then fifteen Member States of the European Union. It entered into force in 2003 and is the most recent agreement in the history of ACP-EU Development Cooperation. It is reviewed every five years.

Meanwhile, the birth of the ACP Group was signified by the signature of the Georgetown Agreement on the 6th of June 1975 in Georgetown, Guyana. The ACP cooperation with the EU has been anchored around the First Lomé Convention in 1975 - and was followed by Lomé II, III and then Lomé IV which was signed in 1990. It was succeeded by the Cotonou Agreement in 2000, and was revised in 2005 and earlier this year for the second time, which has just been signed in Ouagadougou.