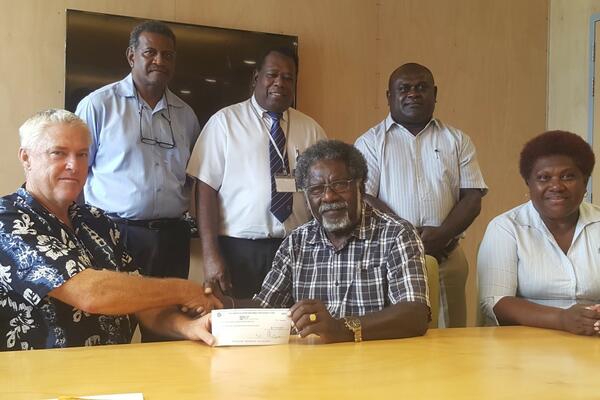 Chairman, SINPF Board, Mr Boyers, handing over a cheque of $120 million to Minister of Finance & Treasury, Hon Rini, in the presence of Ruth Alepio, SINPF Board Secretary (sitting). At the back, standing from left: General Manager (Acting) SINPF, Mike Wate, Governor CBSI, Denton Rarawa and Permanent Secretary Ministry of Finance, Harry Kuma.
Share
Thursday, 23 March 2017 08:05 AM

The second series is a 10 year amortizing $30 million face value bond with a grace period of 5 years with interest only to be paid during the grace period. At the signing the SINPF Board Chairman issued a cheque of $120 million to the Minister of Finance and Treasury for the 1st series bond. The remaining $30 million will be paid on 30 March 2017.

The principal repayments and interest payments of the bonds will be paid bi- annually in the months of September and March during the bond term.

At the signing ceremony, the Finance and Treasury Minister, Hon Snyder Rini thanked the SINPF Board for taking the initiative to participate on the Domestic Development Bond issuance by the Government.

Hon Rini highlighted that the proceeds from the Domestic Development Bonds will be used by SIG to fund its priority projects and investments.

SIG will use the money to co-finance the Undersea Cable Project and shares on Solomon Telekom Company Ltd and South Pacific Oil Ltd.

Minister Rini said the signing of the Development Bond Agreement marks a new milestone for the Government in terms of the government domestic bond market development.

The Minister announced that SIG had plans in place to issue a further $150 million in Domestic Development bonds this year 2017. This will be a public issue and the Minister encourages the SINPF and other interested stakeholders to participate.

In response, the Chairman of the SINPF Board, Peter Boyers said his Board is pleased to participate at this first bilateral bond issue and the SINPF has been looking forward for such an opportunity after the government paid in full its previous development bonds in late 2015.

"The interest rates are above our annual mandatory crediting rate of 2.5% with these bonds annually earning $9,807,000 in interest for our members in the first 5 years and reducing as principal amounts of the amortized bonds are paid down," said Mr Boyers.

"This is part of the Fund’s investment strategy under our strategic asset allocation (SAA) guidelines, to achieve our investment objective to provide real returns to our members during their membership term with the Fund, the Board will allocate part of its investment portfolio to government securities."

Mr Boyers said that the SINPF is well placed to invest in long term national strategic infrastructure projects that will earn good long term returns for our members whilst supporting the development and growth of the national economy.

One of the conditions set out in the agreement is that the proceeds from the Domestic Development Bonds issued under this agreement will not be used to finance any SIG recurrent expenditures.

In the past, SIG also issued Domestic Development Bonds to commercial banks and SINPF. All those bonds were fully repaid in 2015.

Pursuant to section 3 of the Government Loans and Security Act 1979, the Minister of Finance has the authority to raise loans by way of issue of securities in the form of bonds.

The Domestic Development Bonds issued under the agreement have been issued in accordance with the Annual Appropriation Act 2017 and compliance with section (66) of the Public Finance Management Act 2013.

Therefore, Domestic Development Bond issued are in accordance with the Government Loans and Security Act 1979 and the Public Financial Management Act 2013.

The Governor of the Central Bank of Solomon Islands, Mr Denton Rarawa as the registrar of the bonds was present at the signing ceremony to issue the bond certificates in favour of the SINPFB based on the terms and conditions contained in the bond agreement.

Senior officials from the SINPF and the Debt Management Unit of the Ministry of Finance and Treasury has been negotiating the terms and condition of the bond since September 2016 with approvals obtained from the SINPF Board in December 2016 and Minister of Finance in February 2017.