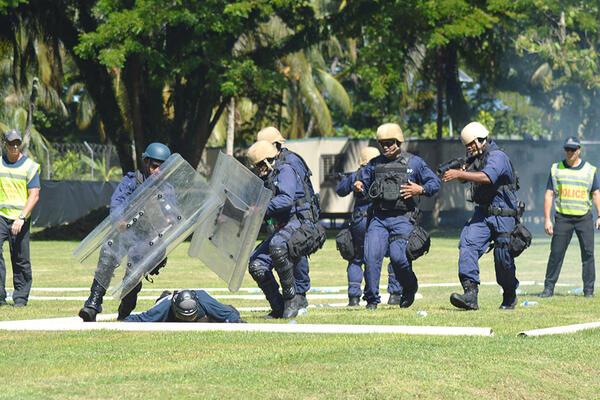 Members of the RSIP Response team at training under the Regional Assistance Mission to Solomon Islands.
Source: Photo Supplied
Share
Wednesday, 10 August 2016 07:31 AM

The Solomon Islands Government (SIG) Special Secretary for the Regional Assistance Mission to Solomon Islands (RAMSI), Mr John Wasi has refuted perceptions that the Australian Federal Police (AFP) is planning to establish a permanent post in Solomon Islands in the post RAMSI period.

He said rather what is happening is that Honiara and Canberra are dialoguing on a new Policing Cooperation framework and are now talking with an Australian design team on the ongoing policing assistance to Solomon Islands.

Mr Wasi said it must be made clear that there is no desire expressed by both parties (Solomon Islands Government and Australian Government) during these bilateral discussions to have an AFP permanent presence in Solomon Islands.

“As a matter of fact, the Australian government, through its bilateral program, will continue to assist the Royal Solomon Islands Police Force (RSIPF) in certain areas of capability and capacity building. What must be noted here is that AFP will only assist RSIPF in their policing program, but the frontline policing duties will be the responsibility of RSIPF. AFP will mainly be working with RSIPF on its mentoring programs, capability programs, capacity development and other programs as may be determined by the SIG.

“We must also note that RSIPF has a new Capability Plan 2016-2020 and a Crime Prevention Strategy 2016-2018 and these are important plans for the future of RSIPF. Therefore, building RSIPF in the post RAMSI period is very important to ensure they achieve their objectives. I believe having cordial cooperation with other donors such as Australia will consolidate the work of RSIPF. Also it must be noted that SIG RAMSI committee has already received a draft Policing Framework Concept paper from New Zealand and we will host a series of national consultation soon before it is approved by Cabinet.

“Let me also make it clear that the new bilateral program is yet to be discussed by national stakeholders and it would be premature to make any judgement, as implied in recent commentaries. What is important is for national stakeholders to discuss this framework and come up with a tailor-made and applicable framework for RSIPF and other Law enforcement agencies. For the information of the public, the Cabinet will have the final say on the Bilateral Framework and we should not even pre-empt their decision. Of course, a report on the RAMSI operation will also be made available before its final closure in June 2017 – and this report will be made available to the parliament, through its formal processes. “

Mr Wasi said the SIG under the leadership of the Democratic Coalition for Change Government is committed to post RAMSI security issues and building a better foundation for the work of RSIPF and other law enforcement agencies is crucially important for our nation building.

“For example, the Defence cooperation with Australia has been a successful bilateral program in terms of our maritime security and capability work. This program has been on-going and SI has been benefitting from such program. In term of the Post RAMSI period, the new Police framework also intends to address the development of RSIPF in specific areas and it is something good for this country. The strengthening of the RSIPF is important to ensure our sovereignty and borders are protected.

“The RAMSI draw Down Strategy is well embedded in the RAMSI Draw- down Strategy 2013-2017 and this process has been going on well since then. As far as the drawdown strategy is concern, the Policing component is progressing well with obligations under the strategy been implemented.”

The SIG Special Secretary on RAMSI meanwhile calls on all Solomon Islanders to support the Leadership of the Prime Minister Hon Manasseh Sogavare and Minister for Police, National Security and Correctional Services, Hon Stanley Sofu as we come to the conclusion of RAMSI operation.

“Their commitment to ensure a peaceful and secured SI must be applauded. As the Prime Minister said, “Let us embrace peace for development and in the same manner, let us embrace the positive legacy of RAMSI to build a better future for our children,” he added.

“Our donor partners are our friends and we must consolidate our partnership because only through understanding and respect for each other, we can build a better Solomon Islands. RAMSI is at its final end of operation and it is a solemn responsibility of all Solomon Islanders to help RSIPF and other LEAs to look after our people. The new bilateral framework with Australia is just a normal bilateral program that addresses the security need of SI and not to infringe on the Sovereignty of SI as alluded to in the media,” he added.

Mr Wasi said in the next few months, the SIG RAMSI Committee will host some media and talkback shows to inform the public on the final withdrawal programs, adding that “if anyone needs more information, I welcome you to our office for further explanatory discussion.”