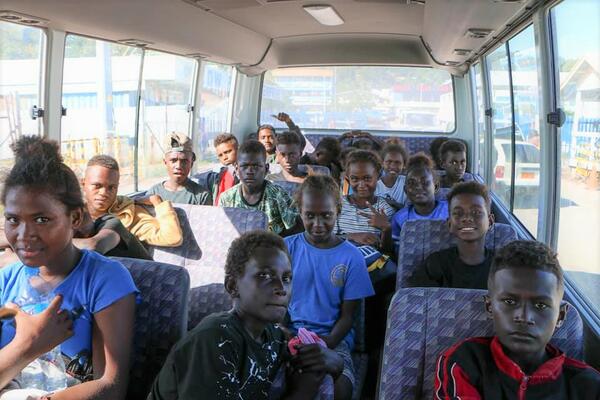 Western province and Choiseul province U-14 boys and girls team arrived this morning for the SIFF Just Play U-14 National Championship in Honiara.
Source: Supplied
Share
Wednesday, 23 September 2020 07:56 AM

The dates are set, the groups have been drawn, and teams are arriving in Honiara for the first ever SIFF Just Play U-14 National Championship.

SIFF Youth Development Officer, Eddie Omokirio said the championship will be first of its kind to be hosted by SIFF.

“This is will the biggest youth tournament for us since we have 42 teams competing in this championship, ” he said.

“The tournament is part of our long-term strategic plan of player identification and development for future national men’s and women’s teams.”

SIFF has stepped up its verification process of players’ registration and Rukumana has praised the PFA Youth Development Officers based in the provinces for work on the ground.

“From past experiences, the overage is an issue we continue to face. So SIFF now has Youth Development Officers based in each province,” Rukumana added.

“These YDOs have helped SIFF a lot in making sure future youth competitions do not experience issues we experienced in the past.

“A few players I had to reject them after consulting with the Ministry of Health and I believe PFA and TSL clubs have already made changes to their teams,” he adds.

The national championship consist of team from PFAs and some TSL clubs.

Only PFA missed out of this event is Renbel Football Association (RBFA) who didn’t meet certain requirements set by the LOC.

“All PFAs have confirmed teams to participate in the championship except for Renbel Football Assocaition (RBFA) who did not meet certain deadlines to submit players birth certification for verification.

"They could not bring teams from the provinces and opted to use players based in Honiara which doesn’t meet the requirement for all PFAs to have players from their teams based in the provinces.”

Top two teams from each group will advance to the quarter-finals, semi-finals and finals.

The tournament is set to run from Monday 28th September to Saturday 3rd October 2020 at DC Park and finals to be held at Lawson Tama.

The Just Play department will set up at the venues to deliver awareness on COVID-19 and other social messages during the duration of the tournament. Just Play will also supply balls and keytags to winning teams.

Full match schedule will be available tomorrow the earliest.