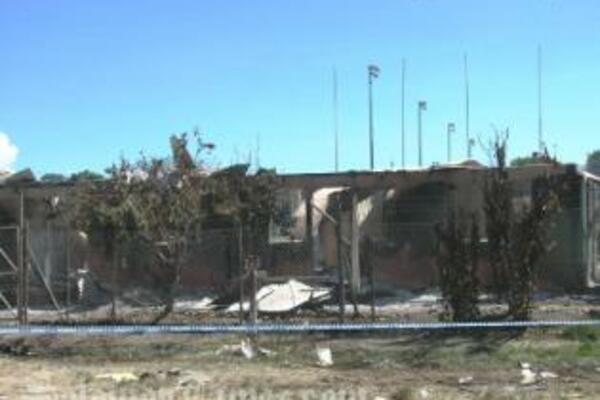 Members of the crowd threw rocks onto the field and set fire to the football administration building following a ruling by the referee against the Malaita team.
Source: STO
Share
Monday, 16 November 2009 08:12 AM

Six people have been arrested as the Police Commissioner Peter Marshall has ordered a criminal investigation into the arson attack on the administration building of the Solomon Islands Football Federation, SIFF.

Mr Marshall condemns the criminal and anti-social behavior of a large number of spectators attending a soccer match between Honiara and Malaita last Saturday.

Members of the crowd threw rocks onto the field and set fire to the football administration building following a ruling by the referee against the Malaita team.

He says police officers were out-numbered at the scene - and a Police fire engine came under attack when it arrived. The fire truck was forced to retreat and a fire officer was struck by a rock.

The Police Commissioner says more than one-thousand people were part of the angry crowd which moved into the China town area and looted one of the shops there.

He says a large amount of goods was stolen and a number of cars, including a police vehicle were stoned and subsequently damaged.

Mr Marshall says the investigation plans to quickly bring offenders to the court to account for their actions.

Meanwhile, Commissioner Marshall says he wants to have urgent discussions with organizers of the Solomon Cup tournament in regards to security for future soccer games.

Mr Marshall says he has directed an assessment to be made in terms of police numbers allocated to soccer matches in the future.

He questions why the Malaita - Honiara match was allowed to commence so late in the afternoon.

Mr Marshall says Solomon Islands police, with RAMSI police and military were alerted and put on stand-by at short notice. But he says he was impressed with their overall response to the incident.

The Police Commissioner says there is no evidence at this stage to suggest the attacks were premeditated. Police are urging members of the public who have information in relation to the matter to contact them on telephone 23666.