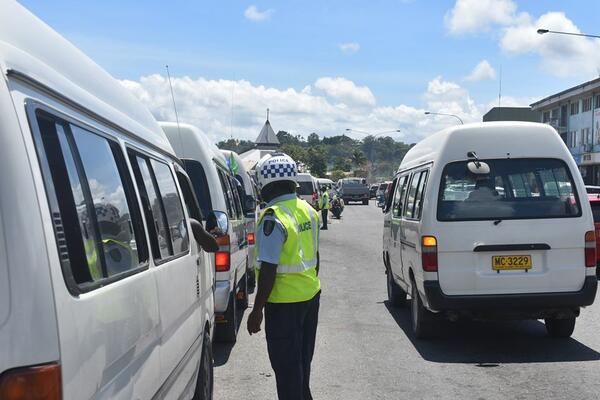 Of specific focus at this meeting was the traffic congestions experienced in Honiara. It is believed that the Road Transport Board (RTB) is the right body to address some of the traffic issues Honiara City is currently facing.
Source: Supplied
Share
Tuesday, 18 February 2020 08:59 AM

The Solomon Islands Chamber of Commerce and Industry (SICCI) and the Royal Solomon Islands Police Force (RSIPF) remain committed to build on the mutual relationship established under the signed Memorandum of Understanding (MoU) in 2018.

The MoU provides a conduit through the setup of an Executive Group comprising of representatives of both parties to explore, discuss and resolve areas of common interest.

The Executive Group, chaired by the SICCI Board Chairman Mr Jay Bartlett, held its first meeting for this year on Thursday 13th February 2020 outlining issues the group looks forward to achieving in 2020.

Mr Bartlett opened up discussions with updates from SICCI, on behalf of its members while reiterating the important of this platform saying that it provides the opportunity for the private sector to take a more pro-active role in supporting our Police Force and vice versa.

RSIPF officials present at the meeting were led by Acting Police Commissioner, Mostyn Mangau who presented an update on behalf of RSIPF and its continuous efforts towards crime prevention and role in keeping our communities and businesses safe.

Executive Group members were also updated on the work the Young Entrepreneurs Council of Solomon Islands (YECSI) is doing together with the RSIPF in Burns Creek, east Honiara in trying to create an avenue for unemployed youths in the area.

Of specific focus at this meeting was the traffic congestions experienced in Honiara. It is believed that the Road Transport Board (RTB) is the right body to address some of the traffic issues Honiara City is currently facing and the Executive Group will continue calling on the Permanent Secretary of the Ministry of Infrastructure Development (MID), who is the Chairman of RTB, and its members, to start actioning its mandate.

The Board which has not been activated since its establishment in 2009, met briefly last year after members received their appointment letters following continuous calls by SICCI in partnership with the RSIPF.

A working group was created under the SICCI-RSIPF Executive Group which has been working with stakeholders and the community to provide a safe environment for vehicles travelling eastbound and westbound on the Kukum Highway near the Fishing Village Market. This was part of efforts to ease the traffic congestion in the City.

The Executive Group agreed during the meeting on Thursday 13th, that a feasible solution to the continuous traffic congestion is to ensure that the RTB gets on with its work.

Therefore, the sub-level working group will now focus on getting the RTB Chairman and its members to reconvene and address traffic issues in Honiara City. The SICCI/RSIPF Executive Group also reaffirmed the commitment to meet on a quarterly basis in 2020.

“RSIPF greatly treasures this relationship with SICCI as one of the stakeholders in the Force’s Crime Prevention Strategy 2019 – 2022,” said RSIPF Commissioner Mangau.

SICCI Chairman, Mr Bartlett, said: “SICCI values this relationship with the RSIPF and the Chamber is open to collaborate, co-ordinate and communicate using our network of businesses to adequately face the challenges ahead of us as a country.”

“For it is only through partnership, collaboration and co-ordination that we can collectively set the course to achieve our collective version of a better, safer and more secure future. I would like to thank the RSIPF and look forward to further working together between both parties in 2020 and beyond,” he added.