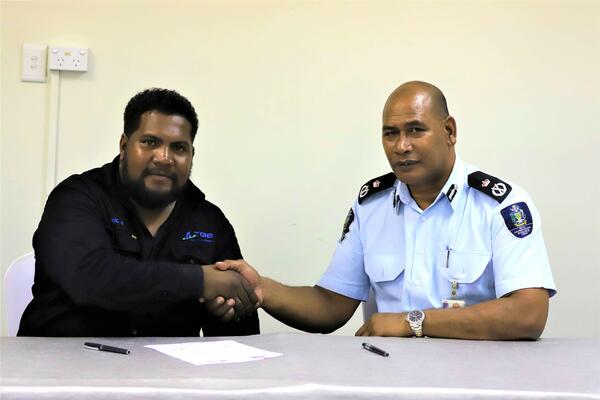 The Solomon Islands Chamber of Commerce and Industry (SICCI) and the Royal Solomon Islands Police Force (RSIPF) recognizes that there is a definite link between the rule of law in a nation and growth in investment which underpins private sector development and job creation.

This was reiterated on Thursday 19 August 2021 during the re-signing of the Memorandum of Understanding (MoU) between SICCI and the RSIPF after a review on the MoU was conducted.

Representing the RSIPF was Police Commissioner, Mr. Mostyn Mangau and SICCI Board Chairman, Mr. Ricky Fuo’o as the signatories to the MoU.

An initial MoU was signed in 2018 after both parties agreed to enter into a MoU in relation to a partnership and joint agreement with the objective to strengthen the relationship between the RSIPF and SICCI.

The purpose of the MoU is to provide a platform for cooperation between the RSIPF and SICCI to:
• Promote crime prevention initiatives;
• Recognise the commercial perspective of businesses within the community;
• Recognise both the RSIPF and SICCI share a social conscience for community wellbeing;
• Allow for the sharing and exchange of information on areas of mutual interest;
• Build a strong relationship that will contribute to nation building, stability, employment opportunities and economic growth; and
• Facilitate two-way communication for the Parties.

SICCI Chairman, Mr. Fuo’o said the importance of the MoU resigning cannot be overstated, especially in these unprecedent times of pandemic and economy uncertainty.

He said the relationship between the RSIPF and SICCI might be seen as unusual in other settings or time but the Chamber sees this as an important link between two frontline communities, the law enforcement and business community.

“In 2018 when we reached out to RSIPF it was a milestone that we have agreed on the signing of MoU to work together to cooperate and promote a secure, peaceful and safe environment in which communities and businesses can prosper through increased economic activity and security,” he said.

“The re-signing of the MoU highlights a significant step in our commitments to create an enabled environment for businesses to thrive in a safe, secure and peaceful environment. The understanding also signifies a growth in our relationship and understanding that the most effective approach is to reach out and grow close with our communities,” Mr. Fuo’o added.

Police Commissioner, Mr. Mangau acknowledged the renewal of the MoU as a step forward in terms of the partnership between the RSIPF and SICCI and an opportunity for increase capability and responsiveness as it gives strength to crime prevention strategies.

“We have managed to achieve some of our targets under the previous MoU and the RSIPF under my leadership looks forward for further working together with SICCI to progress our ongoing and future plans.

“We can work together to create opportunities that benefits young people. Our renewed partnership offers the chance for young people not only to reconnect with their family and community life, but to have access to support and opportunities to find employment and meaningful pathways in life through the support of SICCI and your membership,” he said.

The Police Commissioner also acknowledge the role of the private sector in keeping the country’s economy afloat during these difficult times.

An Executive Group was established under the MoU that enabled meetings and dialogues to take place with exchange of updates between RSIPF and SICCI on identified common priorities where both parties can work together to promote a safe and stable investment climate in the Solomon Islands.

Some of the priorities under this MoU were Road and Traffic issues, Security, Crimes Prevention and updates on recently the COVID19 efforts by the RSIPF at the borders.

SICCI Chief Executive Officer (CEO), Ms. Natalina Hong says: “We believe that the relationship between public and private sector is a crucial partnership, which if strengthen we can adequately face the challenges ahead such a fast-growing population, high unemployment, rapid urbanisation, corruption and inequality.”

SICCI believes that it is only though partnership, collaboration, co-ordination that we can collectively set the course to achieve our collective version of a better, safer and more secure future.

On behalf of its members, SICCI would like to thank the RSIPF and look forward to work together between both parties.