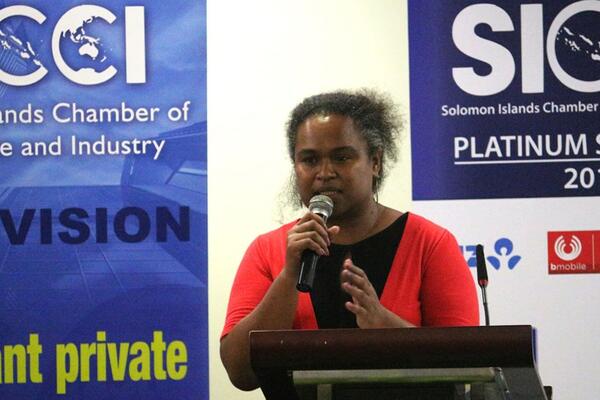 SICCI CEO, Atenasi Ata stressed that the collective view of SICCI member companies is that the review into minimum wage is long overdue, but it is a process that should be conducted regularly so that substantial increases such as 100% increases are not necessary.
Source: SICCI
Share
Friday, 28 June 2019 11:40 AM

Solomon Islands Chamber of Commerce and Industry (SICCI) on Tuesday 26th June 2019 presented its submission, containing views of its members of the business community, to the Labour Advisory Board’s (LAB) review into the country’s minimum wage.

SICCI’s submission, as the peak body representing private sector in the country, focuses on issues specifically relating to the Solomon Islands business community, to provide the LAB with a clear view of how their businesses anticipate impacts of an increased minimum wage.

Two of the country’s largest employers in the country, Soltuna Limited and Guadalcanal Plains Palm Oil Limited (GPPOL), both of whom are active members of the Chamber, also made presentations on the possible impacts of the proposed 100 % increase of minimum wage to the LAB meeting.

The SICCI submission is a compilation of views from businesses after SICCI reached out to its members for their general views, firstly on the minimum wage review and secondly, commenting on the announced increase to $8 per hour.

However, she noted that to ease the shock to employers, increases as large as that announced of 100%, is phased in over a period of time.

“The collective view of SICCI member companies is that the review is long overdue, but it is a process that should be conducted regularly so that substantial increases such as 100% increases are not necessary. An incremental approach to raising minimum wages in the country is a good thing – companies can factor in costs and impacts into their annual planning process.

“Along with the various considerations that the Board must take into account, we ask that the LAB ensures it gives weight to factors such as, the high mobility of the workforce in contrast to the high numbers of working age-individuals; the high unemployment rate in the country; rising operational costs for small business; and the small base of business investments in the country’s economy.

“It is this last point especially that reinforces our call that the increase continues to be tiered according to industries, that is, maintaining the different minimum wages applicable to the agriculture and fishery sectors versus all other sectors. Large and important employers in the country will be severely affected such as Soltuna Company Ltd and GPPOL Company Ltd. These are sectors that bear special thought due to their importance to our economy,”” SICCI CEO, Ms Ata, said.

According to SICCI’s submission to the Board, some employers will not be affected given that they are paying above $8.00 per hour.

During its consultation with members, the SICCI Secretariat received suggested timeframes of at least six (6) months to up to three (3) years for any new minimum wage rate to be implemented.

While acknowledging the fact that raising the minimum wage will enable low income earners to cope with the high cost of living in the country, food, electricity, rent, transport and school fees, SICCI CEO, Ms Ata urges that small businesses in the country must also be well consulted on the proposed minimum wage increase.

“Small businesses including those in the provinces, especially retail, security and service businesses might experience hardships with a very substantial jump such as a 100% increase. For bigger companies an increase such as suggested brings into the conversation, re-examining of benefits that workers currently receive like housing, and utilities support,” she said.

Finally, the SICCI CEO said: “We urge the LAB to recognise the needs of workers and families of Solomon Islands of course. But also, to remember that it has the responsibility to balance this with the national goal of economic development, high level of productivity and the desirability of attaining and maintain a high level of employment.”

LAB meets again on Friday 28th June to continue hearing from other stakeholders including the Central Bank of Solomon Islands, the Ministry of Finance and its Economic Reform Unit before coming to a conclusion of the review.