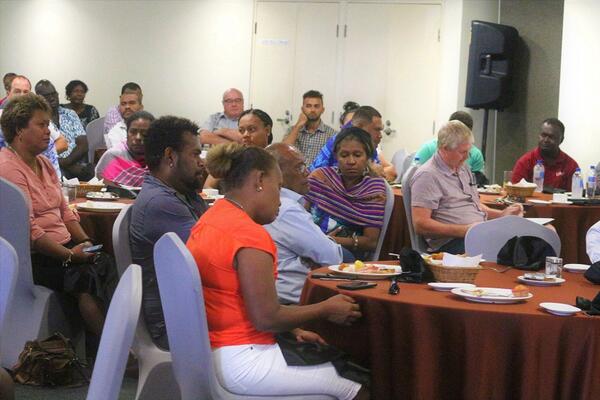 More than sixty (60) business representatives and members of the private sector attended the event to hear Permanent Secretary Dentana present an update on the implementation of the Solomon Islands Government’s Economic Stimulus Package.
Source: Supplied
Share
Wednesday, 22 July 2020 07:17 AM

Last week, the Solomon Islands Chamber of Commerce and Industry (SICCI), on behalf of its members, hosted its first Business Breakfast Information Session this year, 2020.

It was held on Thursday 16 July 2020 and featured keynote presentation by the Permanent Secretary of the Ministry of Finance and Treasury (MoFT), Mr McKinnie Dentana.

More than sixty (60) business representatives and members of the private sector attended the event to hear Permanent Secretary Dentana present an update on the implementation of the Solomon Islands Government’s Economic Stimulus Package.

SICCI sees that the implementation phase of this Stimulus Package is of utmost importance in ensuring that the package meets its intended purpose and intended beneficiaries.

“The key messages then were to ensure that business and industry were monitored and impacts were being relayed; ensure payments were maintained to ensure cashflow; reducing payment days under future contracts and prioritising local content wherever possible with all national projects.

“In April, SICCI presented a series of recommendations for Government to consider in developing the Economic Stimulus Package.

“This was for 20% reduction to tariffs for 6months; maintenance of Government payments; reducing business costs; tax relief measures such as recalculation of provisional tax, tax liabilities to be delayed, penalties waivered; and to banks for loan holidays; specific support action for Small Medium Enterprises (SMEs) and NPF employer contributions,” she said.

The SICCI CEO confirmed that the Economic Stimulus Package announced in May reflected most of these requests – electricity to be reduced although only to 16%; business costs were considered resulting in Ports charges for domestic berthing and entry at Ports removed for two (2) months; NPF relief on surcharges; tax relief through removed penalties and delayed lodgements.

The Chamber also commended the additional measures in the ESP like tourism tax holiday; special reliefs for rental and utility cost subsidy; and bringing forward development partner programs and investments that has greater local multiplier effect.

PS Mckinnie Dentana in his presentation explained the objective of the Economic Stimulus Package being to ease the fallout of the COVID-19 global pandemic on businesses and the general population and to help keep the economy afloat.

Mr Dentana is also the Chairman of the Economic Stimulus Package Committee.
He confirmed that ESP implementation has commenced with stage one focusing on the agriculture, fisheries, tourism and forestry sectors.

He said this is to assist the productive sector players to maintain production output at all levels of the production chain, to ensure the local economy remain active.
Stage two of implementation has also commenced with equity injection into SOEs Solomon Airlines, Solomon Water, and Soltuna as well as KFPL.

It was also confirmed that to date, the Development Bank of Solomon Islands (DBSI) has approved SBD$6 million in loans.

Mr Dentana said third stage of implementation is the tendering out of three major infrastructure projects around the country including bridges and wharves. He assured members of the business community that local contractors will be engaged in this stage of implementation which will also see the participation of local skilled workers contributing to the local economy.

Regarding Government’s position, he assured all present that Government was on track with its commitments to businesses especially for landlords who owned properties rented by Government. Regarding non-payment of contractors, he clarified that regardless COVID-19 situation, Government’s procurement processes still remains and is not relaxed.

Other questions raised in the interactive session was on the possibility of market access for fruits and vegetable farmers in terms of export which seems to be currently focused on cocoa and coconut as well as kava.

There was also an observation that cocoa and copra subsidy although well-intentioned, was also leading to supply-chain disruption. In that producers were now focusing on copra only and not the other products from coconut. It was pointed out that over the medium term, this disruption in supply would affect existing export demand.

The final stage of implementing the Economic Stimulus Package will only commence after closing date for applications from the provinces which has been deferred until the end of July.