SICCI Congratulates McNeil on Appointment as Commissioner of Lands 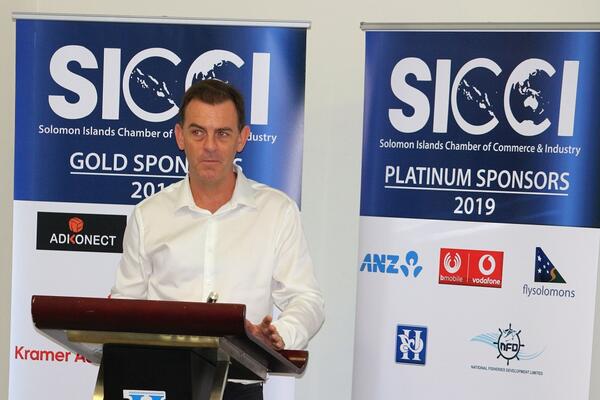 Chief Executive Officer (CEO) Natalina Hong on behalf of the Solomon Islands Chamber of Commerce and Industry (SICCI) Board and its members congratulate Mr Alan McNeil on his official appointment as the Commissioner of Lands within the Ministry of Lands, Housing and Survey.

Mr McNeil was sworn in as Solomon Islands’ Commissioner of Lands on Thursday 22nd October 2020 after taking his Oath of Allegiance at Government House in a brief ceremony presided over by the Governor General, HE Sir David Vunagi.

“With his qualification and extensive work experience, we believe Mr McNeil is the right person for this key position that holds the interest in Land for and on behalf of Government and deals in Land subject to the directions of the Land Board.

“SICCI and our members will continue to support the Commissioner of Lands and we wish Mr McNeil and his team excellence on this important leadership role,” Ms Hong said.

SICCI and the Ministry of Lands, Housing and Survey have an ongoing partnership, as manifested through SICCI’s representation on the Lands Board.

“We continue to value this partnership which reinforces the importance of Public-Private Partnership and wish to reassure SICCI’s commitment to the Land Board and service to the business community and all citizens in the country,” the SICCI CEO said.

“As a Chamber, we look forward to further engagement through the private sector’s representation on the Land Board and contribute to greater change and transparency in decision-making on issues relating to land in our country,” she added.

From a private sector perspective, land remains a key growth aspect and if not managed properly can constrain private sector development by making it difficult for investors to start or expand businesses and to borrow capital.

Mr McNeil took up the position of Commissioner of Lands in an acting capacity for more than 2 years until his appointment was made official on the 22nd of October.