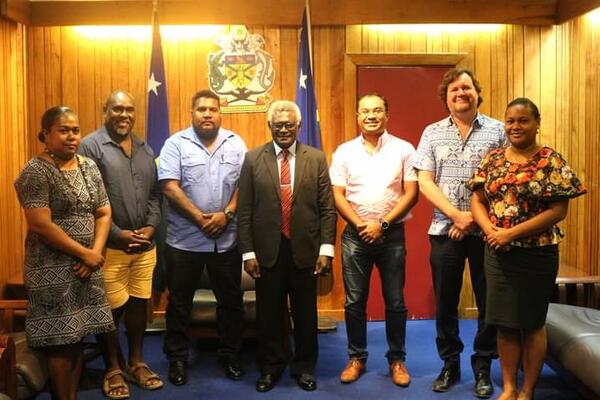 SICCI Chairman, Mr. Ricky Fuo’o in a meeting with Prime Minister, Hon Manasseh Sogavare highlighted that continuous collaboration is important since the private sector plays a critical role for economic growth and jobs creations in the country.

Representative from the private sector organisation led by the Chairman paid a courtesy visit to the Prime Minister on Monday 3rd May, 2021 and also took the opportunity to introduce its new Board Members elected during March’s Annual General Meeting (AGM).

Mr. Fuo’o highlighted that the composition of the SICCI Board is a diverse representation of both large companies and small businesses coming together to form a collective voice for all businesses in the country.

Chief Executive Officer (CEO), Ms. Natalina Hong updated the Prime Minister on some of the activities and work the Chamber has achieved so far this year including Private Sector Pathway to Recovery Strategy, the Chamber’s submission to the Parliamentary Public Accounts Committee inquiry and the recently successful Directorship Programme.

He said the proposed symposium is a platform that brings together critical role-players in the infrastructure investment space as the Chamber believes infrastructure is a key factor in the country’s economic recovery.

“There are currently around SBD7.5 billion worth of infrastructure projects that are either underway or tabled for the next four (4) to five (5) years.

“SICCI continues to encourage Government and relevant authorities to ensure there is sufficient local content included in the billion-dollar worth of infrastructure projects that are planned to enable that economic benefit remain in Solomon Islands,” Mr. Fuo’o said.

He also added that a level playing field and compliance is important to promote fair competition across all the industries.

Prime Minister Hon Sogavare in response acknowledge SICCI for taking the initiative to appear before the Public Accounts Committee (PAC).

“The Private Sector plays a key role in financing the national budget and it is only fitting that they are consulted in this process,” he said.

The Prime Minister also made known his support towards SICCI’s upcoming events in particular the Business Excellence Awards (BEA) and the Infrastructure Symposium.

“Government remains our key stakeholder. We will maintain the current good level of collaboration with the government,” he said.