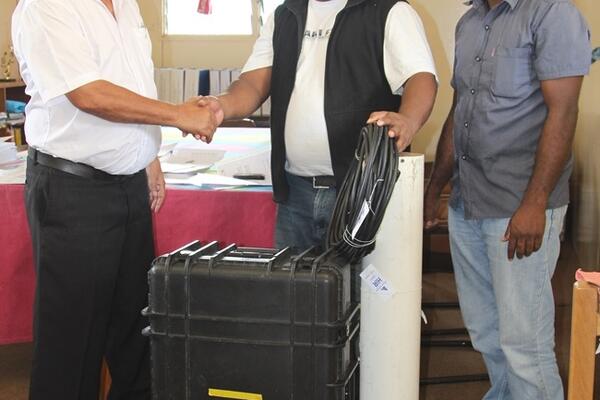 An emergency radio service project that has helped people affected by the earthquake and tsunami in Temotu Province, Solomon Islands last year has successfully reached its end of project time frame.

The equipment was handed over by Lawrence Hillary, Operations Coordinator for World Vision Solomon Islands, who thanked SIBC for the partnership to assist the communities from Santa Cruz Island heal and recover from the disaster that rocked Temotu Province on 6 February 2013.

“It is now the responsibility of SIBC to pre-position the equipment for immediate deployment in future disasters and to use the equipment when necessary to maximize its usage on information purposes that are in line with SIBC’s regulations,” said Hillary.

The General Manager of SIBC, Ashley Wickham received the equipment on behalf of SIBC and NDMO and acknowledged the partnership and success of the project.

“We will continue to give World Vision, NDMO and other agencies in their humanitarian effort in the future through advisory and technical support,” said Wickham.

World Vision, with funding from the New Zealand Aid Programme, provided two deployable radio units and training for community-based volunteers, while SIBC provided the technical expertise and facility to house the project at Lata.