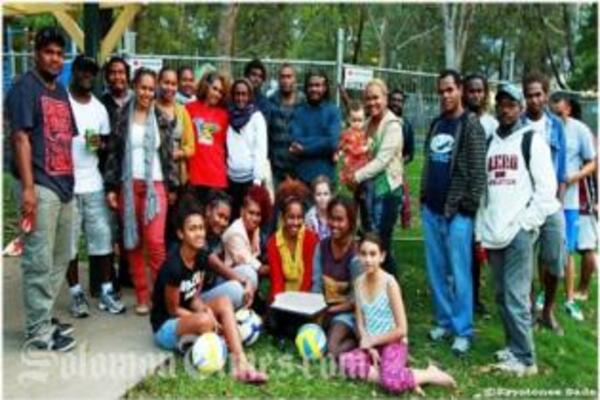 SIBSA members with their cake celebrating their membership with Brisbane City Council over the weekend.
Source: Photo Supplied
Share
Friday, 08 June 2012 08:53 AM

The Solomon Islands Brisbane Students Association (SIBSA) has made history by becoming the first Solomon Islands group to be formally incorporated and registered as a member of the Brisbane City Council (BCC).

In a press statement released recently SIBSA says it is now eligible for BCC financial grants and will be able to participate in all Brisbane City events.

"BCC will also be able to assist SIBSA in any organised event that promotes the association and Solomon Islands as a country," the statement reads.

"This is very important as Brisbane is the gateway to the world for Solomon Islands and therefore such arrangements will lead to future events to promote our country especially Tourism."

The SISBA executive under the leadership of President Trevor Ramoni and Vice President Joyce Konofilia pursued the membership with BCC and eventually it was granted last week. The registration was granted after a month long no objection notice was put out in the 'Courier' newspaper in Brisbane City.

Along with the advertisement a constitution was drawn up and fee paid to BCC for the registration. This achievement is a milestone for SIBSA which was only formed late last year.

Meanwhile SIBSA is preparing to host the first Independence celebrations in Brisbane on 21 July 2012. The event will include a fun day and an official flag raising and function in the evening. A custom queen show will be staged to showcase all 9 provinces of Solomon Islands with performances from local Solomon Islands bands.

Last week the group held their first fundraising and a total of AUD $560 was raised. The idea was shared with the Prime Minister Honourable Gordon Darcy Lilo in his recent meeting with the student body and he agreed to it saying that it is a pride of the country to raise our flag in a foreign country and assured SIBSA of his government support.