Sharing Skills on the Frontline 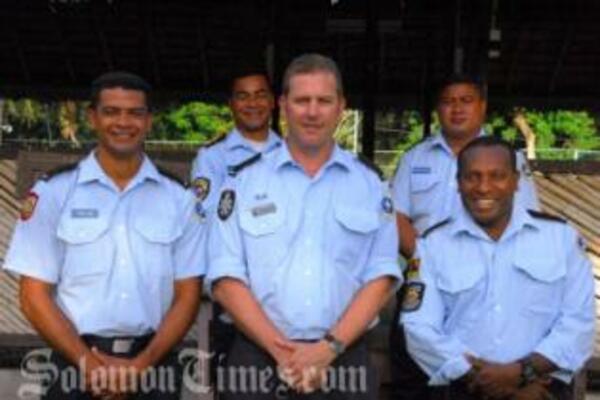 Four Pacific Island PPF Advisors have contributed to significant outcomes in the safety and wellbeing of the people of Honiara.

Liquor Licensing Squad Advisor Tukia Langi from Tonga has already had notable successes in his role with his counterparts Royal Solomon Islands Police Force this year.

Tukia, 32, has participated in patrols of hotspots across Honiara and as part of "Operation High Visability".

He was an integral part of RAMSI support for Police raids to stem the trade of illegal alcohol such as kwaso in local settlements. Tukia assisted in several arrests of offenders involved in liquor offences including street drinking and unlawful sale and manufacture of alcohol.

Tukia is a Detective-Constable with 11 years' service in the Tongan Police, working in general duties, traffic and criminal investigation.

He is humble about his role as an advisor, and prefers not to be know as "the Big Boss." RSIPF members have been complimentary and positive about Tukia's contribution to their team.

In late 2008 Tukia and other members from Samoa, New Guinea and the Marshall Islands were recruited to take a leading role in mentoring and supporting the RSIPF front line police.

"A greater ability to quickly develop rapport based upon cultural similarities and understanding has already produced good results."

He said there were ongoing opportunities to develop positive relationships between Pacific Island members and the RSIPF.

"The four advisors are being rotated to different roles and facets of the General Duties portfolio in the coming weeks to enhance their exposure and personal career development," he said.


One of these officers, Amataga Potoa'e from Somoa, currently advises the Officer in Charge of Central Police Station as part of his leadership role as a General Duties Shift Supervisor known as Lima 7.

A 33-year-old Sergeant from Savaii, Amataga has had 11 years Police Service with experience in general duties traffic, CID and prosecuting.

Even in his down time, Amataga continues to establish positive relationships with the people of the Solomon Islands through playing Rugby and attending special operations days with his RSIPF counterparts which are used for training purposes.

Ben's role entails planning and support of General Duties and Lima 7 response to local incidents including rock throwing, drunken fights in the street and illegal brewing and trading of alcohol.

Back home is Port Moresby he is so well known, the children use his name when playing "cops and robbers". Ben has become well known in RAMSI too, for his high standard of management, administration and leadership.

Ben holds the rank of Senior Inspector in the Royal Papua New Guinea Constabulary, has served for 12 years and brings his experience in task force command, community policing and CID.

Marshall Islander Tarry Tarkij is 32 years old. At home he is a Sergeant with three and a half years Police Service with the National Police Force, where he specialises in Traffic duties.

In his current PPF assignment as Watch House Keeper Advisor, Tarry has produced notable improvements in the accountability of watch house assets, and in the conditions of the watch house.

Tarry says he enjoys sharing leisure time with new friends, and staying in touch with the news back home by reading the newspaper and emailing.

Stuart said all four members have quickly and professionally adapted to their new workplaces.

"I am impressed with their ability to grasp unfamiliar management concepts and reporting requirements" he said.

"Their enthusiasm and professional approach to their respective duties should be acknowledged."