Sharing an Insight on Climate Change 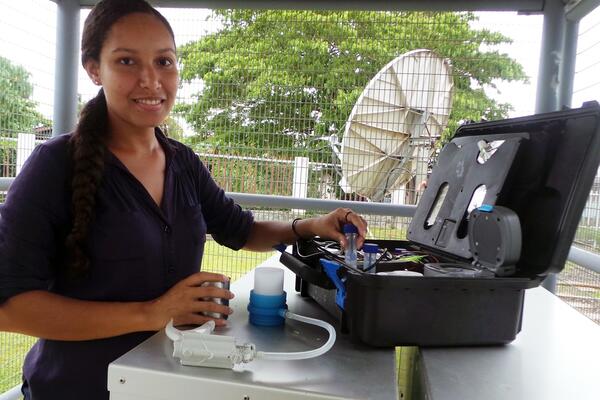 Tema Wickham is a Provincial Officer with UNDP Solomon Islands, working on a project to improve the resilience of fresh water resources.
Source: undp-adaptation.exposure.co
Share
Monday, 16 April 2018 07:41 AM

An archipelago of over 990 small islands, covering around 27,000 square kilometres, the Solomon Islands boasts rich cultural diversity and an array of terrain, species and natural resources.

In many ways, it is an island paradise, yet, like any other small island developing state, the nation faces a range of specific development challenges, now complicated by the emerging adverse impacts of climate change: rising sea levels, more variable and unpredictable rainfall, and more intense extreme weather events.

The nation’s future depends on its capacity to adapt to and mitigate the impacts. Local capacity is also key.

Tema Wickham is a Provincial Officer with UNDP Solomon Islands, working on a project to improve the resilience of fresh water resources. Tema shares the key risks and impacts Solomon Islands communities face, what makes them particularly vulnerable, and what the Government is doing to address the issues.

Tema, we know that Pacific islands nations are particularly threatened by climate change. What are some of the specific risks that Solomon Islands communities face?

The impacts are multiple and interconnected. For instance, there are communities living along the coastlines and on low lying islands/atolls who, due to rising sea levels, are facing increased coastal erosion, inundation and salt-water intrusion. This impacts their fresh water supplies, a serious problem, especially when communities depend on the groundwater sources for drinking.

These issues can also greatly affect food and land security, soil fertility and the livelihood of the community as a whole. Some communities in Ontong Java, Reef Islands of the Temotu Province, Lau Lagoon of Malaita Province, Roviana Lagoon in the Western Province and Santa Catalina of Makira Province have already experienced their root crops, such as taro, dying due to salt water intrusion.

Furthermore, drought is a major hazard for communities that depend primarily on rainfall. When there is none or little water available, this greatly affects people’s health and impacts public health safety.

The most obvious reason is that Solomon Islands is situated in the tropical region prone to natural disasters. Our people, our places and our systems are rendered more vulnerable due to a weak economy, limited access to basic services, different levels of education and the isolation and fragmentation of islands.

The capacity for communities to survive natural hazards varies across the country, affected by these factors.

What are the changes have you have personally seen?

The climate and weather is shifting: nowadays rainfall patterns vary and are unpredictable – more intense heavy rain in a shorter period has caused flooding and landslides. I’ve seen landslides in the hilly areas in Gizo and I experienced the 2014 flash flood disaster in Honiara. Additionally, I’ve seen small islands disappear and coastlines being eroded due to sea level rise.

I spent five years studying at Goldie College Secondary School in the Western Province. It’s located on a low-lying island, one of many islands badly affected by coastal erosion. The school is highly dependent on rainwater for drinking; therefore when there is no rain, the tanks run empty and we tend to turn to a local freshwater spring for drinking water as well as for cooking, washing and bathing.

Over those years at Goldie College I noticed that the groundwater became salty. We had to wait until low tide to collect water especially for drinking. This source was our life savior. Ten years on, I heard that it was no longer used as a water source for the students. Surrounding trees and plants are also dying because of salt water intrusion.

What do you perceive are the main challenges in addressing climate change in the Solomon Islands?

A lack of public awareness and understanding of climate change is another barrier. Awareness and education programs for government, communities, schools, institutions are really important to building capacity and improved decision-making.

What action is the Government taking to address the impacts on communities?

Our government has come to recognize the seriousness and urgency of addressing climate change impacts.

The establishment of a National Climate Change Policy 2012 – 2017 was an important step forward in supporting the implementation of adaptation in communities. The policy reflects the Government’s engagement in ensuring climate change initiatives are guided and implemented accordingly.

Relevant ministries - such as the Ministry of Environment, Climate Change, Disaster Management and Meteorology (MECDM), the Ministry of Mines, Energy, and Rural Electrification (MMERE), and the Ministry of Agriculture and Livestock - are supporting climate change adaptation programs such as of the Solomon Islands Water Sector Adaptation Project (focused on securing sustainable water supplies, sanitation and hygiene) and the Strongem Waka lo Community fo Kaikai project (which helped local communities manage climatic pressures on food production).

The Government is also investing in Automatic Weather Stations nation-wide, to collect data for weather forecasting and early warning systems, as well as awareness campaigns in both rural and urban communities, considered to be essential to disaster preparedness.

What support has UNDP been providing to address the impacts?

These investments help protect the livelihoods of our communities to adapt to climate change impacts.

Finally Tema, could you give us an insight into some of your day-to-day responsibilities under the Solomon Islands Water Sector Adaptation Project?

I work mostly in Gizo, Western Province, one of the six pilot sites of the project. My duties include coordinating support for the project’s activities and facilitating community adaptation planning at provincial level.

Apart from development work under SIWSAP, I support the project team in planning, implementation, monitoring and reporting to ensure activities, results and lessons are documented. I also report to the Western Provincial Government and collaborate with Gizo-based NGOs in the climate change and water sectors.

It’s a privilege to be part of the UN’s global development network and a great opportunity to contribute in supporting the provincial government and giving back to the communities.