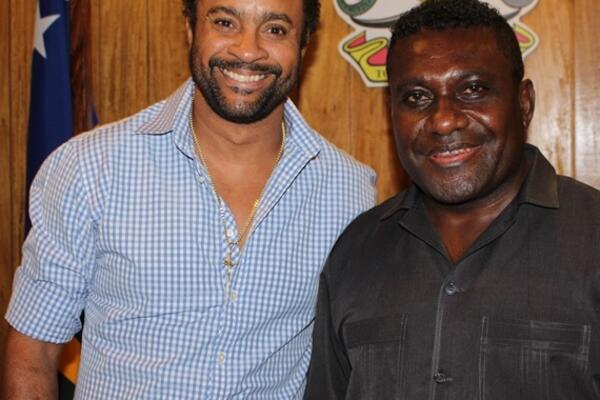 Prime Minister Lilo thanked Shaggy for choosing to tour the Solomon Islands and described Shaggy as a great musician that has many followers of his music in the Solomon Islands.
Source: Government Communications Unit
Share
Tuesday, 04 February 2014 08:21 AM

Shaggy told the Prime Minister that he was really happy to be in the Solomon Islands.

He said this was his first time to be touring this part of the south pacific describing it as ‘historical’. “I am overwhelmed by the hospitality and friendship of the Solomon people and also the beautiful islands here,” said Shaggy, speaking in Jamaican dialect.

“You’re a great musician,” Mr Lilo said. The Prime Minister also enlightened Shaggy briefly of some of the historical background of the Solomon Islands.

Prime Minister Lilo also presented a shell-money necklace to Shaggy as a token of appreciation. “The shell-money is hand made from shells and it is a gift that will always remind you of the Solomon Islands,” Mr Lilo said.

Shaggy staged an electrifying performance for hundreds of Solomon Islanders on Sunday night at the Heritage Park Hotel, lasting more than an hour.

The Jamaican Grammy-award artist has left for Port Moresby this morning.