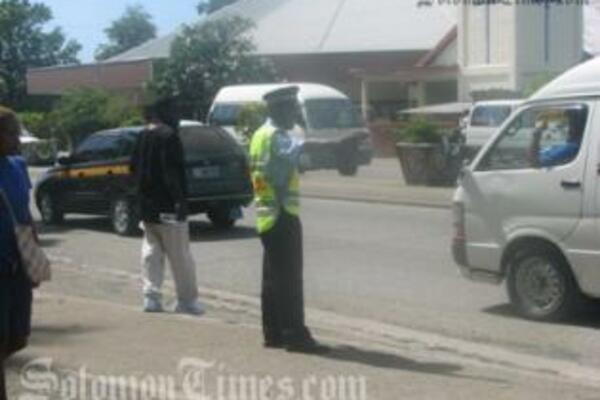 Additional Police will be stationed in various places in Honiara as part of the Security Beef up over the weekend.
Source: STO Archives
Share
Thursday, 31 December 2009 09:36 AM

Police will launch a security operation today and will continue into the weekend to coincide with the New Year celebrations.

Additional officers will be deployed on the streets in Honiara and surrounding communities to ensure the safety of residents.

The RSIPF Response Team will be utilized in this operation and they will be assisting general duty officers with street beat patrols, traffic control and a variety of other policing tasks.

Acting Assistant Commissioner Mosese warned those who may want to celebrate the New Year to do so in a peaceful and lawful manner.

"Traditionally, people want to make excessive noise on New Year's Eve and day, however, some of the activities associated with it such as using fire crackers, dynamite and other explosive devices are illegal," Acting Assistant Commissioner Mosese said.

"I am warning the public that anyone found using or in possession of any explosive devices is liable to be arrested and charged under the Explosive Act," he said.

Acting Assistant Commissioner Mosese also stated that the New Year's celebration is all about celebrations, reflection and looking forward to the New Year. Such festive occasion has no place for selfish acts such as tipping and knocking over of rubbish bins along the streets.

"Such lack of common sense and nuisance will not be tolerated by police and anyone caught engaged in such foolishness will be arrested," he said.

New Year is a significant event and people will go from one place to another to visit and celebrate with families and friends.

There will be mid-night religious services held in parts of Honiara and motorist are warned to be cautious, as a large number people, including women and children will attend such services.