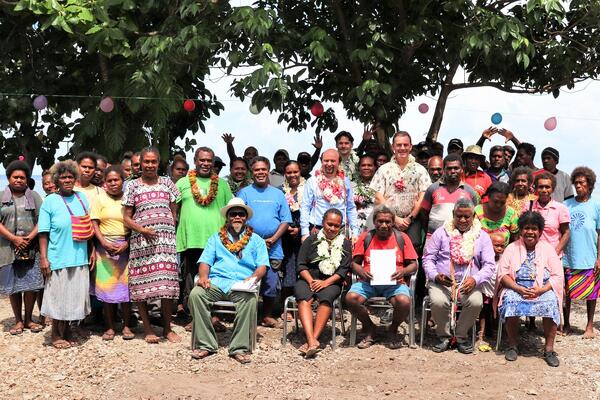 The UN Development Programme in Solomon Islands has supported the Government’s Customary Land Recording programme conducted by the Ministry of Lands, Housing and Survey in three target provinces – Guadalcanal, Western and Malaita.

On 19 November, UNDP and the Ministry of Lands, Housing and Survey representatives handed over the certificates of land recording completion to the customary landholding group of the Sahalu community in Guadalcanal Province, confirming the recording of their lands in the Repository of the Central Land Records Office.

The Customary Recording was carried out under the Customary Land Act and preceded by public awareness dialogues and consultations, boundary mapping and reconciliation between customary landholding groups’ members.

In his welcoming speech, Hon. Ismael Mali Avui, Minister of Lands, Housing and Survey, stressed the importance of cooperation and expressed his gratitude to UNDP for the continuous support. Furthermore, Hon. Minister Avui encouraged customary landholding group members to support the Government in the implementation of land reform programmes.

“What we witnessed today is a milestone not only for the Sahalu community but for the nation. It shows us how far we’ve come and that more yet to be done.”

Hon. Minister Avui emphasized the close connection between land recording and peacebuilding processes in the country, “Securing land rights is an important component of sustainable development and peace. Therefore, the customary land recording helps unite communities and lays strong foundations for social cohesion. It plays a great role in securing our conflict-free future.”

Speaking on behalf of the UN Development Programme in Solomon Islands, Mr Vardon Hoca, UNDP Programme Manager echoed the same sentiments and noted that “investing in land recording is a pivotal tool for conflict resolution and peacebuilding.”

Reflecting on the land recoding process and UNDP’s close partnership with the Government in this matter, Mr Hoca highlighted “five customary landholding groups in three provinces have completed the recording under this programme” and “having land rights recorded grants the landowners the right to utilize land for development,” Mr Hoca summed up.

With the Sustainable Development Goals as a guiding thread, UNDP works to promote peace and inclusive societies by supporting and partnering with governments, civil society organizations and people to participate in processes to prevent conflict and sustain peace.

The customary land recording process in three target provinces has been completed by the Ministry of Lands, Housing and Survey within the Inclusive Governance of Natural Resources (IGNR) Project framework implemented by UNDP Solomon Islands and UN Women with the financial support from the United Nations Peacebuilding Fund.

UNDP is the leading United Nations organization fighting to end the injustice of poverty, inequality, and climate change. Working with our broad network of experts and partners in 170 countries, we help nations to build integrated, lasting solutions for people and planet. Learn more at www.pacific.undp.org or follow us on social at @UNDP_Pacific and @UNDP_Solomons.