Seaweed Farming Can Be a Lucrative Business 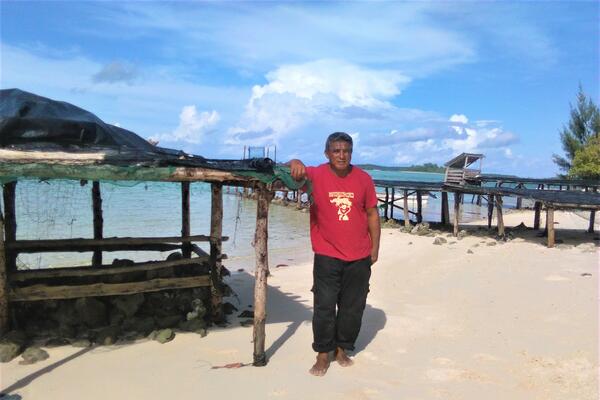 Mr Ata standing beside his table on the island of Peniamina, just outside of Wagina.
Source: Georgina Kekea
By Georgina Kekea
Share
Friday, 17 July 2020 08:26 AM

Seaweed farming is a very lucrative source of income, says Atarake Ata who has been a seaweed farmer for six years now.

Ata used to stay in Noro but decided to move his family to the island outside of Wagina, Peniamina to farm seaweed.

“We went to the mainland to cut timber to build our house”, Ata says.

The island of Peniamina now has about 20 families living on it.

“An issue here for us is water and sanitation”, Ata says.

He says since living on just a small islet, the houses are crowded. Most of the houses have tanks where they collect rain water to sustain themselves.

“We love living on the island. We have had our share of natural hazards. Big winds and cyclones. But we just stayed on the island. SOme of us go back to the mainland during those times”, Ata says.

He says the daily boat trip from the main island of Wagina is quite expensive so the families decided to make a home on the small island instead. The island is quite small, it does not even take 10 minutes to walk around it. The beachfront is full of tables mainly built to put seaweed on to dry in the sun. Each family has their own table.

Like any other crop, seaweed takes about three months to grow before it is harvested.

“I do my planting in a way that I also harvest everytime”, Ata says.

“We have an agent on the island that buys seaweed, so we do not have any problem at all in selling seaweed”, he says.

Asked if he is thinking of settling full time on the island, Ata says it is only temporary.

“We will be going back to the mainland. We are saving money to complete our house on the mainland. You know we cannot stay here permanently because we do not know how long this island will be here for. You know the issues of climate change are also real here”, Ata says.

He pointed to a spot about five to eight meters away from the shoreline.

“That is where the island was when I first came here on the island. Now it is covered with sea”, he says.

“I also have a child studying in Fiji”, he says.

He says since moving to the island, he has not been able to send his other children to school.

“They just stayed with us on the island and helped on the farm”.

A survey carried out in 2013 found that out of 209 households studied in Wagina Island, 42.5 percent mentioned that seaweed farming is a source of income for them. The income they receive from seaweed farming helps in meeting daily household financial expenses.

On the economic level seaweed farming is said to earn foreign exchange earnings and reduce the balance of trade problem that is faced by many Pacific Island Countries.

In the year 2013, there were four seaweed companies exporting seaweeds to France, Vietnam, and China.