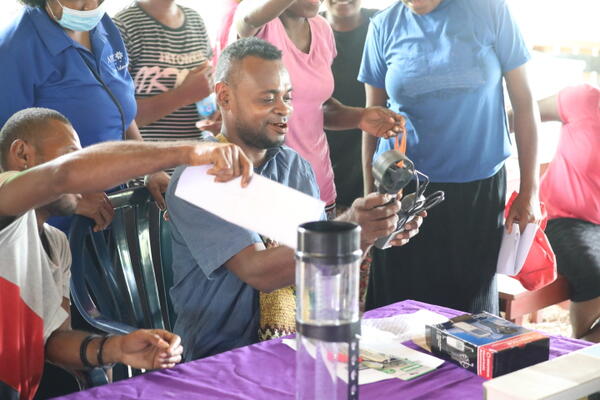 The handing over was followed by basic training on the equipment and a simulation exercise to test the effectiveness of SIMS new SMS early warning system currently being developed with financial support from the AHP.
Source: Supplied
Share
Friday, 10 June 2022 10:04 AM

The Tropical Cyclone Tracking Maps will help the 4 schools and 8 communities to strengthen their capacity to prepare and respond well to disasters through the leadership of their village disaster committees and active participation of the communities including people with special needs.

Speaking before the formal handover, Director of SIMS Mr. David Hiriasia, said his Division is happy to work in partnership with World Vision and the eight communities in this Disaster Risk Reduction Project. He said organisations like WVSI are the experts in working with communities. Their valuable input in the whole collaborative effort with all stakeholders is the result of the handing over of the equipments.

Responding to the remarks from Director SIMS, Premier of Makira Ulawa Province Mr. Julian Maka’a thanked WVSI, NDMO and SIMS for working with their overseas partners to secure the equipment that will help the people of his Province.

Premier Maka’a was particularly pleased with SIMS and its stake holders for really taking this particular initiative down to his people at the village level. “A lot of time we hear about funding for various projects coming into the country from abroad, but this is the first time it has really reach the people down there who really needed it” he said.

He further stated that in order for the country to move forward these linkages must go right down to the communities. By doing so communities will have a better understanding and appreciation on why the government is engaged in certain project and why donor partners are willing to help us. These are important understandings that must exist between the government and it people.

Meanwhile, four schools also received basic weather equipment’s from the SIMS funded by the Australian Bureau of Meteorology through the World Vision AHP Disaster Ready Program in Makira Ulawa Province. The equipment will help compliment the theory part of students learning being able to do hands on experiments using the equipment’s.

The initiative is part of SIMS awareness approach to help students and communities better understand the science and technical aspects behind weather processes that impacts our daily lives.

Speaking on behalf of World Vision who is major partner in delivering the project, Ms Judith Kaki, Manager General Services, said her organisation is pleased to be a partner in this very important undertaking and thanked the education authority, teachers and students of the four schools for allowing the project to carry out its activities in their schools despite the additional commitment it requires from teachers, but hopes that the benefits derived from the projects activities will outweigh the pressure of additional responsibilities.

She thanked the SIMS, NDMO and Makira Ulawa Province for partnering and supporting the work of World Vision Solomon Islands to secure the equipment from the Australian Bureau of Meteorology.

As part of SIMS continuing effort to help people at the village level to receive disaster related early warnings, mobile phones have been provided to chairpersons of each of the participating communities Disaster Committees. The mobile phones have the capability of receiving real time SMS warnings from SIMS should a possible disaster becomes eminent.

The handing over was followed by basic training on the equipment and a simulation exercise to test the effectiveness of SIMS new SMS early warning system currently being developed with financial support from the AHP.

The handing over ceremony is witnessed by Officials from the Makira Ulawa Provincial Government, Provincial Disaster Management Office, representatives from Makira Red Cross Office and members of the participating communities and schools.