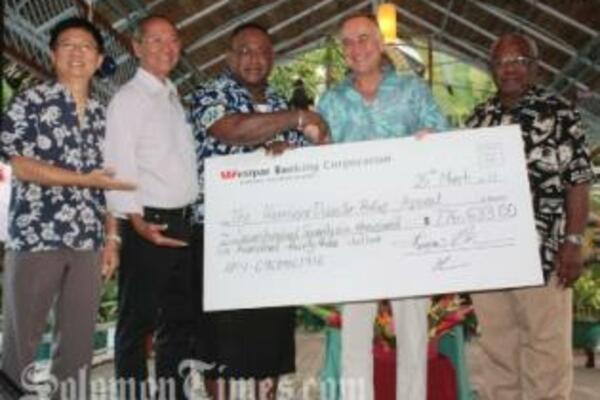 Deputy Prime Minister Hon. Manasseh Maelanga was amongst other dignitaries invited to witness the handover of a cheque of more than SB$700,000 to the Australian High Commissioner to Solomon Islands Frank Ingruber on Friday at the Honiara Hotel.

The money is a donation from the people of Solomon Islands to assist relief efforts in Queensland, Australia following floods that claimed hundreds of lives and damaged countless properties.

The money was raised following a series of fundraisings by a Honiara-based fundraising committee spearheaded by Sir Thomas Chan as Chairman, Ken Kwan and Father John Lamani.

Sir Thomas said his committee was unable to reach a target of SBD$1 million but was only able to raise more than SBD$700,000 as a small donation from the hearts of the people of Solomon Islands to the people of Australia, particularly Queenslanders who suffered during the recent floods.

"Australia always helped Solomon Islands during the many natural disasters that hit us in past years and this money although small is a donation from our hearts although our country is poor," Sir Thomas said.

"I was moved by this action and it shows how kind-hearted the people of Solomon Islands are," Mr Ingruber said when he thanked Solomon Islanders for their help towards Australia.

Mr Ingruber was also deeply moved when he learnt that children of Chung Wah Primary school had also donated their lunch monies towards the fundraising drive.

Deputy Prime Minister Maelanga thanked his fellow Solomon Islanders for standing up and helping the people of Australia during their difficult time.

He said Solomon Islands are a poor country but its people are very compassionate in helping those who are in need.

"This donation is a demonstration that Solomon Islanders are caring and would not like to see other fellow humans suffer in any way," Hon. Maelanga said.

The handover ceremony was attended by prominent members of the community including Speaker of the National Parliament Sir Allan Kemakeza.

A next series of fundraising drives towards relief efforts in Christchurch, New Zealand and Japan is set to start soon.