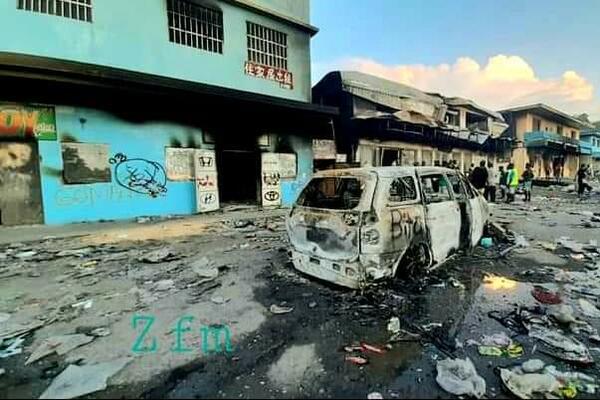 This was announced by the Minister of Finance and Treasury, Harry Kuma when tabling the $5.5 billion 2022 Appropriation Bill in Parliament for its Second Reading Thursday last week.
Source: File: Zfm
Share
Tuesday, 19 April 2022 17:38 PM

The Government has approved a $200 million reconstruction and rehabilitation package over a period of two years to assist businesses affected by the November 2021 riots.

As part of this package, the Government is also prepared to offer tax reliefs and exemptions to the identified businesses that were damaged and affected.

This was announced by the Minister of Finance and Treasury, Harry Kuma when tabling the $5.5 billion 2022 Appropriation Bill in Parliament for its Second Reading Thursday last week.

Kuma said the unrest represent one of the largest economic self-inflicted shocks the country has experienced since 2006.

The Ministry of Infrastructure Development’s latest report on the riots showed an estimated loss of SBD$811 million in 2021. The report also showed that a total of 81 businesses and buildings were affected. This comprised of 53 fully damaged buildings, and 28 partially damaged buildings.

The total loss was equivalent to 6.1 percent of the pre-unrest 2021 GDP value. This is a great loss that will take many years to recover from.

“The civil unrest had also severely impacted Governments fiscal operations. Preliminary indicators have shown that Government has lost $120 million in total revenue in the last two months of 2021 alone. Ongoing revenue losses for 2022 are estimated at $200 million,” Mr Kuma said.