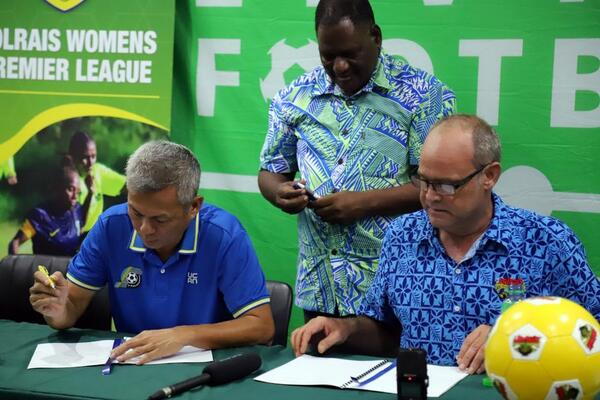 The Solomon Islands Football Federation (SIFF) and Solrais signed a new contract worth SBD$100,000 for the sponsorship of the Solrais Women's Premier League 2022 season.

Solrais is the major sponsor for the women's premier league for the past two seasons and is committed to continuing its sponsorship for the next two years.

The support by Solrais has paid off, with the Women’s national football team winning the bronze medal, finishing 3rd at the OFC Women’s Nations Cup 2022.

Despite the loss to Fiji they regrouped and won the bronze medal – in itself a historic feat.

Regular competition and a committed sponsor has shown the potential women hold in flying the Solomon Islands flag high.

SIFF President William Lai spoke highly of the women’s team when they reached the 3rd place play off against Samoa.

"Our journey started three years ago…some senior players started more than 10 years ago, some of you just started, " he said.

"My journey as SIFF President will end June next year and we have achieved many good things together.”