Say No To Political Violence: Varley 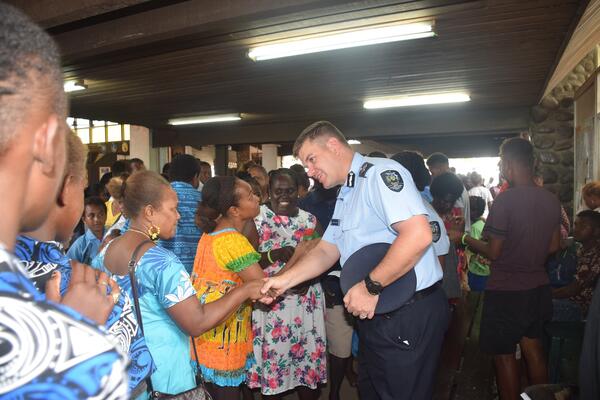 Commissioner of the Royal Solomon Islands Police Force (RSIPF) Matthew Varley today urged parishioners at the Holy Cross Cathedral in Honiara to help spread an Easter message of peace in the community and to encourage people to say no to any violence during the election of the Prime Minister on 24 April 2019.

The RSIPF Commissioner and members of the RSIPF Executive visited many Easter church congregations across Honiara today (21 April) to remind people about the importance of maintaining a safe and peaceful environment during the upcoming election of the Prime Minister. Provincial Police Commander, Guadalcanal Province, Chief Superintendent, Evelyn Thugea accompanied Commissioner Varley during this mornings’ Mass at Holy Cross Cathedral.

Speaking to about 1000 parishioners, Commissioner Varley said, “The Easter message we heard today is one of hope and peace. I’m here today to ask the good people of the Holy Cross community to help spread that message of peace and tolerance as we head towards the election of the next PM. All of us as Christians can play a vital part in spreading the message that the election on Wednesday should be peaceful. No one wants to see a return to any political violence in this country.”

“The RSIPF will be mounting a large scale police operation across Honiara City and some parts of Guadalcanal during the next few days to ensure the election of the Prime Minister is conducted securely and peacefully. More than 500 police officers will be deployed around Honiara and at Parliament House to provide security during the event,” said the Commissioner.

He adds: “We are calling on all citizens to show responsible behaviour and spread the Easter spirit in their community at this time. Accept the announcement of the next Prime Minister with a good heart. Show respect for one another which has always been a part of our traditional culture.”

“Stay away from large crowds. And do not become involved in any unlawful protests or disturbances. The RSIPF needs the support of all citizens, including chiefs, elders, church leaders and all women, men and youth leaders, to help us ensure our community remains safe and peaceful,” says Commissioner Varley.

Commissioner Varley emphasises: “Peace is more important than politics. People may want political change but no-one wants political violence. Do not allow any disagreements about the outcomes of the election of the Prime Minister to cause divisions amongst us. Let’s move forward peacefully during this Easter season to develop our nation for a better future for everyone.”

He says, “I want to remind everyone that as part of the security arrangements for the election, a liquor ban will be enforced from 23-25 April 2019 within Honiara City and Guadalcanal Province. The Honiara Central Market will also be closed on 24 and 25 April.”

Your Police are also urging members of the public to stay away from the centre of Honiara City and around the Parliament complex on Wednesday 24th and follow the process of the election of the Prime Minister on radio or social media if they do not have any important business in town on that day.