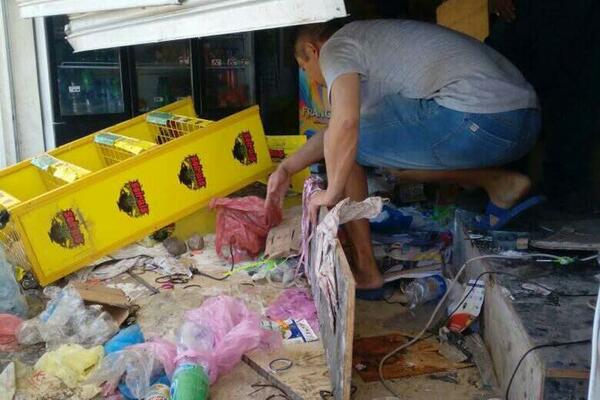 A scene of utter devastation as shop owners, most of them Chinese, pick up the pieces following the rioting and looting by youths after the election of Prime Minister yesterday afternoon.

“I am sad, I am fearful, why all this? what have we done?” says Jin Lee, a Chinese shopkeeper, trying to come to grips with the wave of looting and unrest that took place yesterday.

“We were upstairs while everything was happening, my 4-year-old daughter will not leave her room this morning.”

“We were scared, worried for our lives, stoning and tear gas and just the violent way these youths – I mean God help us” said Sharon, a mother of three who lived just few meters up the road where the rioters and police clashed. “Where are we heading?”

When the violence broke out in the capital, Honiara, yesterday afternoon, the police scrambled, controlling the mob, driving them away from the main city center.

“We were just told by security to go to the back of the hotel, all we could hear was stuff breaking and just people shouting – we were huddled in the back with some guests…felt very sorry for them,” said Kay, one of the waitresses at the casino.

But the impact was most dramatic at Lungga and Henderson, east of Honiara. Private security groups were unable to control the rioters. Businesses were ransacked or torched as residents stayed in their homes waiting for the carnage to subside.

“Look at this, what do they (rioters) have against us? we were not part of electing him, we are just here trying to make a life for our family,” a visibly emotional Xiu Wang, another shop owner, told Solomon Times.

“They are thieves,” murmured his wife, crouched in the corner of their badly damaged shop. “All of them are just thieves, shame on them.”