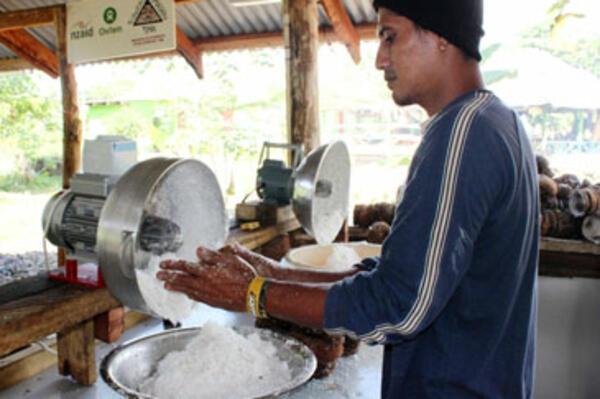 Source: www.spc.int
By Secretariat of the Pacific Community
Share
Wednesday, 07 August 2013 09:06 AM

Creating income-generating opportunities for rural people in Samoa is at the heart of an initiative that engages small-scale famers to produce virgin coconut oil for export.

Apia-based non-governmental organisation (NGO) Women in Business Development Incorporated started this venture almost two decades ago with just a handful of famers. Today it has grown to a large-scale operation that is supporting around 55 extended families in Samoa and 11 production sites that process and extract virgin coconut oil.

The venture is supported by the European Union-funded Increasing Agricultural Commodity Trade (IACT) project. The project, which is being implemented by the Secretariat of the Pacific Community (SPC), recently assisted Women in Business Development by procuring equipment worth over FJD 35,000 to be used in the production of virgin coconut oil.

Women in Business Development is one of the 28 enterprises that receive assistance under the IACT project in the Pacific region. The main goal of the project is to further strengthen the export capacity of Pacific members of the African, Caribbean and Pacific Group of Countries (ACP) in the primary industries of agriculture, forestry, aquaculture and livestock.

The equipment that arrived at the Women in Business Development factory in May this year includes five electric graters and five oil presses purchased in New Zealand. The IACT project has also assisted with the reconditioning of four old presses.

With the new equipment, Women in Business Development’s Executive Director, Adimaimalaga Tafuna’i, believes that the organisation now has the capacity to increase its yearly production by more than 10 tonnes.

‘The equipment will enable farmers to produce significantly more virgin coconut oil, with eight production sites now operating and three more sites set to resume operations in October as they wait for the supply of coconuts to pick up in the wake of tropical cyclone Evan,’ she said.

Tafuna’i says the increase in production will benefit farmers and their families because they will continue earning a regular income and contributing to their family and village obligations, and not relying on remittances.

‘These families now have a way of retaining their sons and daughters to work on the coconut farms because they will be offered paid employment in the family business,’ she stated.

The virgin coconut oil currently produced by Women in Business Development is exported to a large cosmetics company in the United Kingdom called The Body Shop International, and to smaller buyers in New Zealand and Hawaii.

Annually, Women in Business Development produces around 32 tonnes of virgin coconut oil, most of which is sold to The Body Shop under its Community Fair Trade programme. The oil is used in The Body Shop’s range of coconut skincare and beauty products, which are sold in 3000 stores around the world.

The development of virgin coconut oil and other coconut products is a huge shift from the traditional copra trade practised in the Pacific for many years.

For Samoa, Turagacati says this has the potential to revitalise the coconut industry, which is included in the country’s national development strategy, and help induce future economic growth within the agriculture sector.

Tafuna’i says that IACT’s assistance has been extremely important in helping the organisation further expand its virgin coconut oil project.

‘We have markets for all our organic products, but as an NGO we do not have the resources to ensure that we have the quantity of supply to meet the market needs. We are working with IACT to address our equipment shortage as we are confident that new markets may open up if we have the supply,’ she explained.

According to Turagacati, the investment made by IACT on the electric graters and oil presses will help Women in Business Development meet its export orders.

In the near future, Women in Business Development has plans to build a new warehouse that will house its production facilities and support its increasing exports.