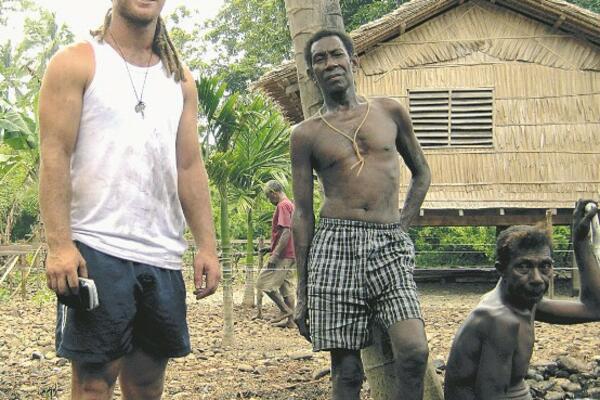 Matthew O’Sullivan from Glenfield (left)has been in the Solomon Islands since mid-June to continue his work building a new church in Makaruka, Guadalcanal.
Source: nzcatholic.org.nz
Share
Tuesday, 02 July 2013 08:59 AM

For one young Kiwi, doing volunteer work in the Solomon Islands as part of a Mahitahi — Catholic Overseas Volunteers programme will have a special poignancy.

Matthew O’Sullivan from Glenfield left for the Solomon Islands in mid-June to continue his work building a new church in a remote part of the country.

Matthew took the spirit of his late father, Sean O’Sullivan, who died in March, with him in a special way.

Matthew’s father, who was a building surveyor with architectural experience, helped in drawing up the plans for the new church in Makaruka, which is four hours walk from the nearest existing church in Avuavu.

“This project is particularly special for me because, unfortunately, my father passed away just over two months ago now, and he actually designed the church, so it is actually a big driving force behind it,” Matthew told NZ Catholic.

“I was always driven to do it, but now it is just extra special. It will be nice to have it as a reality. I’ve spent a lot of hours on it, so when it comes to reality, it will be great.”

This is Matthew’s second stint as a volunteer. He began working with the community in 2012 when he went for two months to assist with site preparation and laying the foundations. It is hoped that the main structural work will be completed during his current stay.

Mahitahi understands that the project has had an amazing effect of building community spirit — at Christmas more than a thousand people gathered for celebration of the Mass, and work has continued even in Matthew’s absence.
Matthew left the villagers with a special project last time — to shift several tonnes of aggregate material, more than a kilometre by hand, for the concrete to be used in the church, as there are no vehicles.

“It is quite a challenge,” Matthew, who is a builder by trade, admitted.
The 25-year-old can see himself going for at least one further trip to the Solomons before the project is completed.

Working as a self-employed contractor in New Zealand, Matthew said he is able to go on these overseas assignments because the property developer and building crews he works for here are flexible.

“I said to them, this is what I have to do and I will see you when I get back. No issues with that, if I finish the projects I’ve done.

“I’ve always wanted to help lesser developed countries, it has been something I’ve wanted to do from a really early age.”

Hayden, having completed a Bachelor of Information Technology from the Nelson Marlborough Institute of Technology, has been recruited to assist Don Bosco Technical Institute in Honiara with computer and information technology.

He will assist with running short courses in computer and IT, and update the institute’s website. He will work with rector Fr Ambrose Pereira, SDB, and the institute’s staff to upskill them in maintenance, trouble shooting, and use of the technology.

Having also been very involved with youth leadership in his home parish in Richmond, Hayden goes with a strong passion to follow God’s call to mission, to step out of the comforts of a privileged life in New Zealand and go where God leads. He will be on location for three months. Both young men were commissioned for this work from their parishes at Masses on June 9.