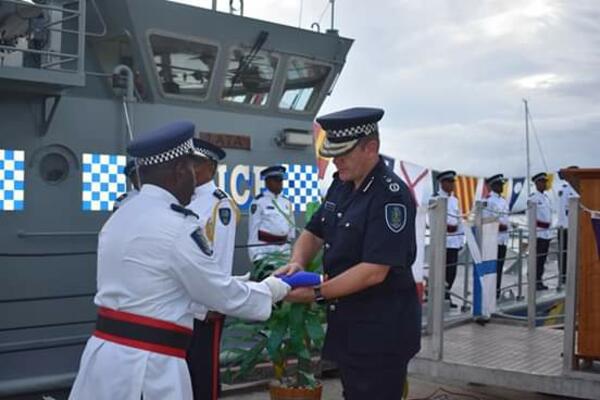 Police Commissioner Varley at the decommissioning ceremony of the RSIPV LATA at the Maritime Aola Base in Honiara.
Source: Supplied
Share
Thursday, 12 September 2019 11:27 AM

As the sun set over the Maritime Aola Base on the foreshores of the capital Honiara, the faithful lady, the Royal Solomon Islands Police Vessel 03 LATA ended its service to the Government and the people of Solomon Islands.

The ship’s colours bearing the green, yellow and blue strips of the National Flag have been lowered for the final time after being hoisted for the past 30 years.

With emotions flowing from some of the former and current crew, the RSIPV LATA was decommissioned from serving as part of the RSIPF Maritime fleet during a moving ceremony at the Aola base at 6 pm on the 11th of September 2019.

Commissioner of Police, Matthew Varley has issued the farewell order to the LATA’s crew: “You are hereby instructed to sail the RSIPV Lata on her last journey to Australia whereby you are to hand Lata to the Commonwealth of Australia on Wednesday 18 September 2019 thereby terminating her service to the RSIPF and to the people of Solomon Islands.”

The LATA was gifted by the Government of Australia to the RSIPF in 1988 under its Regional Defence Cooperation Program. It was named after the capital town of Temotu Province.

“LATA will be sadly missed,” says RSIPF Commissioner Varley before he issued the final order for the vessel and received the ship’s white ensign as it was lowered for the final time and given to him for safekeeping until the arrival of the replacement for the LATA.

Since its commissioning in 1988, LATA has steamed thousands of nautical miles on operations both within Solomon Islands waters and in the Pacific region.

“LATA has been an integral part of the RSIPF over the past 30 years. It has become a second home to many of our Maritime Officers. She had been involved in operational duties including border patrols, 200-mile Exclusive Economic Zone patrols and other deployments including disaster relief within the Pacific region. I salute all the officers who have served on board the LATA during its 30- year service.”

In 2011 RSIPV LATA received an award of appreciation from the Australian Defence Department to the ship’s company for “the excellent maintenance” of the boat.

Commissioner Varley thanked the Australian Government for the RSIPV LATA.

“The RSIPF is proud to bid farewell to the RSIPV LATA and thankful to the Australian Defence Force and the Australian Government for making available the vessel and the continued support towards the RSIPF’s maritime capability.”

Also at the farewell ceremony, Minister of Police, National Security and Correctional Services, Hon. Lanelle Tanangada paid tribute to the service provided by the LATA and the officers that served on her during her 30 years in Solomon Islands.

“Patrol Boat Lata was at the forefront in national operations, bringing together the men and women of the RSIPF, the medical fraternity, the National Disaster Council and other agents of the government, all working together in their common purpose to promoting the interest of the nation and keeping our communities alive, well, healthy and safe,” says Hon. Tanangada.

She adds: “To the commanding officers and crew, I understand this vessel has been your home. Today, might be a sad day for some of you. I know you will treasure your memories of Patrol Boat LATA. I would like to thank you all for your tremendous service in this boat during the past three decades

The RSIPV LATA with its 21-member crew will leave the Maritime Aola Base for the final time this Sunday 15 September 2019 bound for Australia.

The RSIPF still has the RSIPV 04 AUKI in its Maritime fleet.