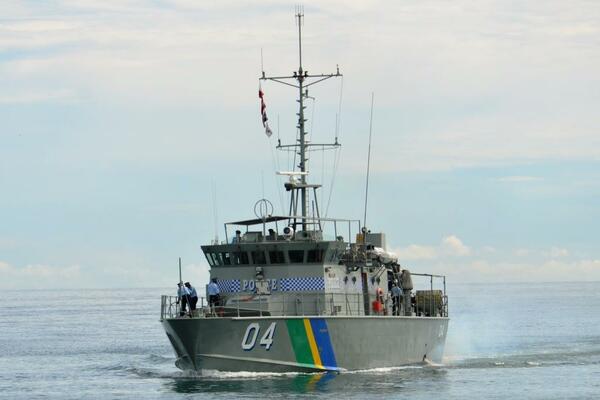 Officers on board the Royal Solomon Islands Police Vessel (RSIPV) Auki are fine after supporting RVS TUKORO and anchored outside the patrol boat base in Port Vila, in the Republic of Vanuatu after operating within the islands to the southern part of the country where a cruise ship called in last week.

The patrol boat Auki has been in Vanuatu to conduct a joint surveillance patrol with the Vanuatu patrol boat RVS Tukoro under the Niue Treaty Subsidiary Agreement between the two countries as well as assist the Vanuatu Government during their National General Election (NGE) last week.

Chief Superintendent Sau explains: “The patrol boat Auki had just returned from the southern Islands with Vanuatu Police, Mobile and Maritime Forces to Port Vila last Saturday 21 March 2020 when we received information that a cruise ship that left the Mystery Island in southern Vanuatu on 12 March 2020 had arrived back in Sydney, Australia where a passenger was tested positive for COVID 19.”

“Since our officers were operating in that area we directed them to anchor 100 meters from Mala base in Port Vila. They have been there since and when I checked with them on Monday this week they were all fine.”

Director Sau adds: “A test for the coronavirus (COVID 19) has been carried out on five people from the Mystery Island and sent to Noumea, in New Caledonia. The results of the tests were expected yesterday (25 March 2020) and if the tests are negative the officers on board the patrol boat Auki will be cleared. If the results are positive then our officers will be quarantined for 14 days and once they are cleared then they will be released.”

“I want to assure members of the families of our officers on board the patrol boat Auki and the public that our officers are safe and are well. At this stage we cannot confirm when the RSIPV Auki will arrive back in Honiara,” Chief Superintendent Sau emphasises.