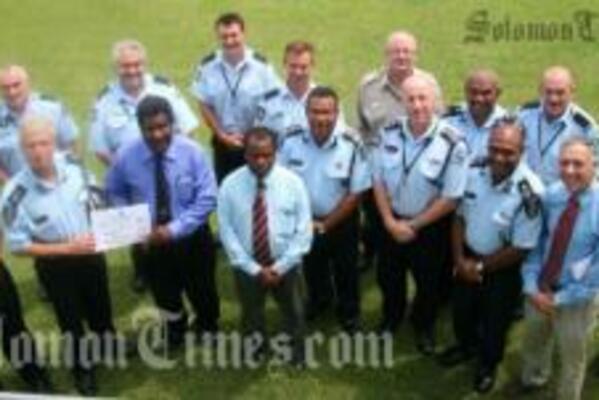 Mission of RSIPF is to work in partnership with the community.
Source: Police Media Unit
Share
Friday, 18 September 2009 09:54 AM

Deputy Commissioner Walter Kola led a watershed presentation of the RSIPF's Strategic Directions for 2010-2013 to the Minister for Police, National Security and Correctional Services James Tora.

This historic gathering with RSIPF and PPF Executive members was the culmination of months of hard work to refine and develop a Strategic Directions plan for 2010-2013.

Police Commissioner Peter Marshall presented the document to the Minister for Police and Correctional Services, who congratulated the RSIPF staff involved and agreed it be brought before Cabinet next week.

Deputy Commissioner Walter Kola during his presentation emphasised that the mission of the RSIPF is to work in partnership with the community, building confidence in the RSIPF for a safe, peaceful and prosperous Solomon Islands.

The RSIPF's Strategic Directions were finalised after a week-long workshop in August involving more than 40 Provincial Police Commanders and Directors of the Royal Solomon Islands Police Force.

Deputy Commissioner Kola told the gathering that the workshop was very valuable in that it enhanced the leadership and management capacity of the RSIPF.

"These sessions had a particular focus on leadership roles, business planning, reporting and performance management," he said.

As part of the training workshop, Provincial Commanders and Directors were given the opportunity to review the goals and aims of the RSIPF.

"Provincial Police Commanders and Directors grasped the opportunity and ownership to review the goals and aims of the RSIPF for 2010 to 2013," Deputy Commissioner Kola said.

"In doing so they are reaffirming their commitment to a united RSIPF."

Deputy Commissioner Kola stated that the workshop is the first of its kind and it has been a huge success for the RSIPF.

Police Commanders and Directors from stations and operational units across the organisation set down eight strategic goals that they have developed and incorporated into the RSIPF Annual Business Plan.

"The PPCs have successfully participated and completed the workshop and were confident they can come up with their Unit Action Plans for 2010," Mr Kola said.

"This is something that has never happened in this organisation before and it is a great leap forward for the RSIPF," he said.

At a press conference today (17 September), Commissioner Marshall also emphasised that the number one goal of the RSIPF is to build up community confidence by reducing crime in the communities

"The primary goal of the RSIPF is to increases community confidence and reducing crime and the fear of crime within communities goes hand in hand with this," Commissioner Marshall said.

Commissioner Marshall said that finalising the RSIPF's Strategic Direction one year ahead of schedule was a fine achievement.

"Our police officers are eager to live up to the high standards and expectations set," he said.