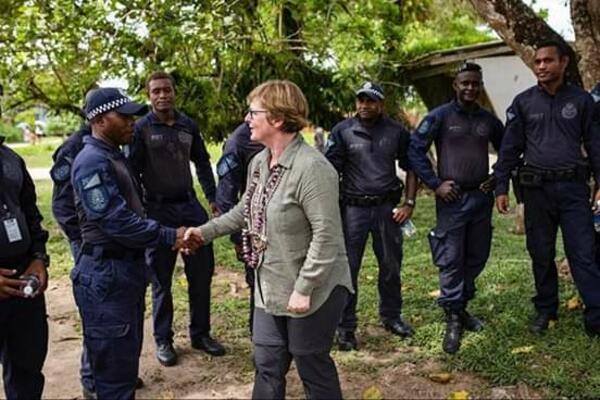 Officers from the Royal Solomon Islands Police Force (RSIPF) in Western and Choiseul provinces and the Police Response Team (PRT) joined staff from National Disaster Management Office (NDMO) and other Government Agencies (OGA) agencies in Taro for the commencement of the 2019 Coastwatchers Exercise on 28 August 2019.

The ‘Exercise Coastwatchers’ is a bilateral Exercise between the Australian Defence Force (ADF), the Royal Solomon Islands Police Force (RSIPF), and OGAs in Solomon Islands.

This is an annual event since it was first conducted in 2017 and this year it is conducted within the vicinities of Choiseul and Western Provinces with the base for the Exercise at Taro, Choiseul Province.

The Coastwatchers Exercise is heavily supported by soldiers from the Australian Defense Force (ADF) 6RAR Battalion who are providing instructional staff and logistical support over the two week training program.

“The official commencement of training activities with all RSIPF Officers and participants receiving first aid training from ADF medics started on the second day. This training focused on basic first aid response for Officers who had not had recent training and also advance training for the PRT Officers enhancing their current training level. The first aid training will provide a strong basis for primary care for officers of the RSIPF as they support their local communities,” says ACP Uiga.

The National Disaster Management Office also provided awareness on what happens when there is the declaration of a disaster and the process thereafter.

RSIPF frontline officers from Choiseul Province also provided support for the PRT in their first scenario exercise. This scenario allowed the PRT to showcase their tactical skills to ADF instructors during a PRT response. The scenario provided an opportunity for a few members of the Taro community to participate as role players and they appreciated the role and opportunity to work with RSIPF and ADF personnel.

“I want to thank the Western and Choiseul provincial governments and the people of both provinces for supporting the Exercise while it is conducted in their communities.”

The Coastwatchers Exercise 2019 will end this Thursday 5 September.