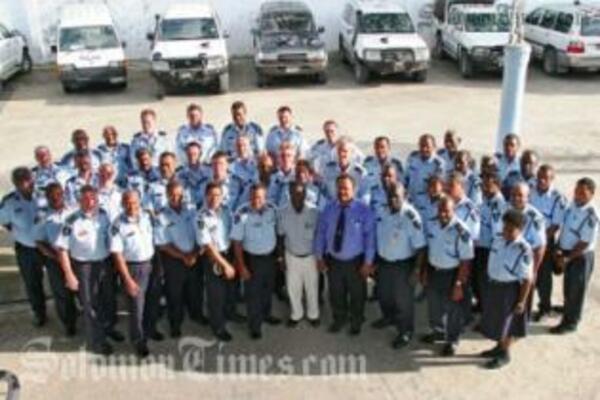 Nearly 40 directors of police units in Honiara and commanding officers from the nine provinces met and discussed issues impacting on the RSIPF in policing and identifying future development opportunities.

During the conference delegate from each province and unit presented reports on policing developments and areas that require further development. Some of the issues discussed included leadership, management and importantly discipline.

The Minister for Police and National Security Hon Samuel Manetoali congratulated the delegates at a function to mark the closing of the week long conference in Honiara on Friday 3 April 2009.

He told the participants that for any organisation to move forward, it must have a clear plan for the future.

"Peace and security of this country rests with you and as leaders of the Royal Solomon Islands Police Force, it is indeed important that you establish the future direction of the organisation," Hon Manetoali said.

"I trust you have benefited immensely from this conference. I say here with conviction that I am pleased with the effort put in to this and I congratulate you all for the successful completion of this conference," he said.

Acting Deputy Commissioner Operations Edmond Sikua when addressing the participants at the closing said that it is vital for police commanders and directors to share their experiences and identify problems and as a group, come up with solutions.

"Provincial Commanders fundamentally provide advice and recommendations to the RSIPF Executive with a view to improve provincial law enforcement status."

"The conference and the nation-wide operation that ensued gives police leaders from the provinces a chance to impact on the way policing is carried out across the country", Acting Deputy Commissioner Sikua said.

Other significant issues also addressed at the conference include a stronger focus on community policing to promote a better working relationship with the community; resource management to would warrant accountability; and a 2010 establishment plan that would determine a better distribution of the RSIPF human resources.

Another important issue that was deliberated on was planning and coordination in relation to Critical Incident Response Management. The RSIPF is now better prepared to respond and manage extreme critical situations such as natural disasters, riots, civil disorders and extreme criminal activities etc.

As part of the critical incident response management discussions, all commanders and directors were tasked to participate in a national operation.

"This is the first ever police operation to be conducted nation wide and it is a good opportunity to implement what they have discussed during the conference," he said.

At the closing of the conference, the participants reaffirmed and pledged to progress leadership and management practices and uphold the values of the RSIPF. Importantly, the Provincial Commanders and Directors pledged their full support for the newly appointed Commissioner Mr Peter Marshall.