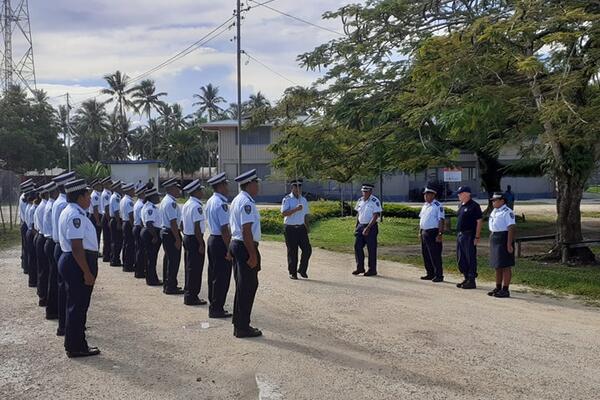 It has been established that those responsible for the incident were members of a local security company and not the CRU or any other police officer.
Source: File
Share
Monday, 15 June 2020 16:50 PM

The Royal Solomon Islands Police Force (RSIPF) categorically denies that any of its officers including members of the Central Response Unit (CRU) in Honiara City were involved in the “Police Brutality” story which appeared in the Island Sun newspaper today.

RSIPF calls on the victim in the alleged incident as well as the Publisher, the Editor and the Journalist who wrote the story to publicly apologise to members of the CRU and all the police officers in Solomon Islands for wrongly accusing them of being responsible for the alleged brutality on the victim.

“Following investigations by Officer-in-Charge of the CRU, Inspector Tex Tafoa after the story appeared in the newspaper today it has been established that those responsible for the incident were members of a local security company and not the CRU or any other police officer. In fact an off duty police probationer was at the scene of the incident trying to assist the victim,” says Acting Commissioner of Police, Mostyn Mangau.

Acting Commissioner Mangau adds: “We welcome the personal apology by the victim and a member of his family to the CRU at the Honiara City Central Police Station this afternoon but already the story has gone viral on Facebook. RSIPF is therefore requesting a public apology by the victim as well as the Island Sun newspaper for failing to make any attempts to verify the story but instead rushed into publishing a story that has now tarnished the good reputation of the CRU and the RSIPF for that matter.”

“I request a front page apology from the Publisher, the Editor and the writer of the story to members of the CRU and all ranks and files of the RSIPF for a story which was never checked and now ruined the integrity of the full Force,” says Acting Commissioner Mangau.

He adds: “I call on the Island Sun newspaper as well as other media in Solomon Islands to be responsible in their reporting of such sensitive issues especially checking the facts of stories before publication.”

“I would like to commend the work of members of the CRU and other police officers throughout the country for continuing to sacrifice their precious time and effort to deter anti-social behaviour in Honiara and the rest of the country to ensure our citizens are safe and secure,” says Acting Commissioner Mangau.

RSIPF encourages the victim to press charges against the security company involved in the incident during the weekend.