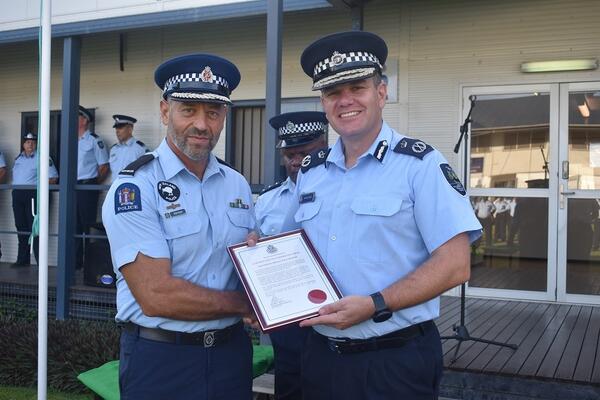 SIPDP Advisor, Paul Porter of the Australian Federal Police (AFP) is leaving after serving under the Regional Assistance Mission to Solomon Islands (RAMSI) since 2011 and continuing on under the SIPDP after RAMSI ended in mid-2017. Advisor Porter spent the last two years working in the RSIPF National Response Department.

SIPSP Team Leader, Paris Razos from New Zealand Police is leaving after setting up the SIPSP to assist the RSIPF in community awareness including the formulation of the Crime Prevention Strategy which has been recently reviewed. The new document will be launched soon.

During the weekly parade at the Rove Police Headquarters in Honiara today, RSIPF Commissioner, Matthew Varley thanked both advisors for their contributions to the development of the Force after the departure of RAMSI.

Both advisors were presented with Letters of Commendation signed by Commissioner Varley. Outgoing SIPSP Team Leader Razos was also presented with a RSIPF International Law Enforcement Cooperation Medal. SIPDP Advisor Porter was presented with a similar medal at the end of RAMSI in mid-2017.