RSIPF Discusses More Cooperation With US 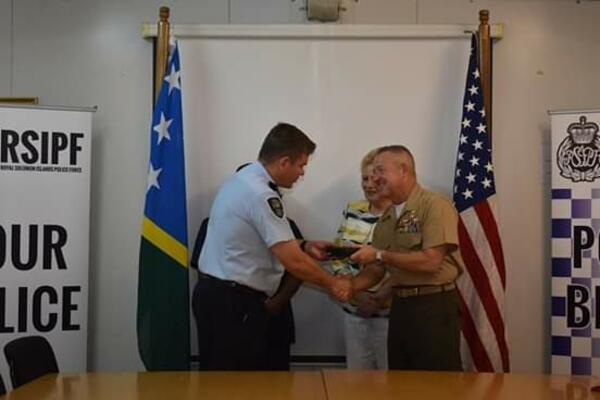 Commissioner Varley receives a gift from a member of the US delegation.
Source: Supplied
Share
Tuesday, 13 August 2019 08:21 AM

RSIPF Commissioner Matthew Varley and his Executive as well as the Supervising Minister of Police, National Security and Correctional Services of Solomon Islands, Christopher Laore and Supervising Permanent Secretary of the Ministry of Police, Mactus Forau met with a high level delegation of the US Government at the Rove Police Headquarters in Honiara on 8 August 2019.

Commissioner Varley and his Executive also met with members of the United States House of Representatives US House Committee on Foreign Affairs on 6 August 2019.

“During the meetings with the high level delegations from the US Government and its military representatives we discussed areas of further cooperation between the RSIPF and US military including issues of regional security, training, logistics support, border security, transnational crime, maritime security, cyber-crime, drug trafficking and fisheries,” says Commissioner Varley.

He adds: “The US has a lot of expertise in these areas and so we are discussing how RSIPF could benefit under a cooperation program with the appropriate agencies.”

“It was an honour for me and the RSIPF Executive to be able to meet with the high level delegations from the US while they were in Honiara for the G77 Anniversary Program commemorating the Battle of Guadalcanal during WWII,” says Commissioner Varley.