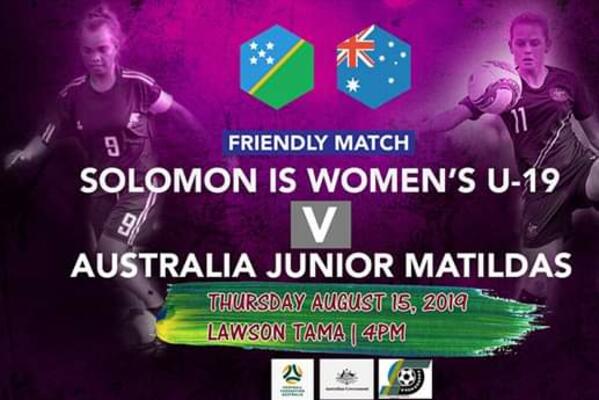 Officers of the Royal Solomon Islands Police Force (RSIPF) in Honiara City will provide security at the international friendly football match between the Australian Westfield Junior Matildas Football team and the Solomon Islands under 19 National Women’s Football team to be held at the Lawson Tama Stadium in Honiara on the afternoon of Thursday 15.

“It is anticipated that the FIFA sanctioned friendly match will definitely attract a large number of football fans due to the fact that this is the first international women’s football match to be staged in Solomon Islands,” says Provincial Police Commander (PPC), Honiara City, Chief Superintendent Stanley Riolo.

He explains: “About 40 of my frontline officers will be conducting security checks at the gates at Lawson Tama as well as stationed at strategic locations around the Stadium to ensure it is safe for the players and the fans alike during this historical match. Traffic officers from the Kukum Traffic Centre will also be controlling traffic around the Lawson Tama Stadium.”

“I want to call on all football fans and supporters of both teams to come and enjoy the match and not to be involved in any anti-social behaviour that might affect the day. No one who is drunk will be allowed to enter the stadium and all possible weapons including sharp objects will be confiscated at the gates.”

“My officers will also be stationed on the Lawson Tama hillside to prevent anyone who intends to disturb the match by throwing rocks into the field or the crowd. There will be zero tolerance to anyone who engages in any anti-social behaviour in and around the Stadium to ensure families who want to watch do it without fear,” PPC Riolo emphasises.

He adds: “Let us show the world that we too can host such FIFA sanctioned international matches in a safe and secure environment and that we are a sports loving nation."