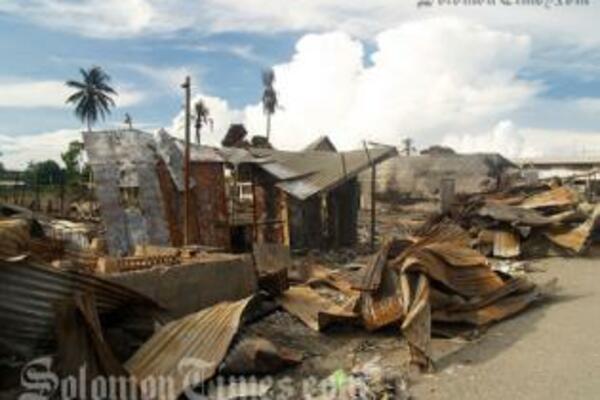 "The fault for the riots lies only with those who broke the law," Acting Commissioner Kola said.
Source: Photo Supplied
Share
Wednesday, 08 April 2009 13:43 PM

Acting Commissioner Walter Kola said today that the RSIPF respectfully received the finding of the Commissioner of Inquiry tabled in Parliament.

"Many of the policing issues raised by the Commission have already been acted on over the last three years," Mr Kola said.

Mr Kola said the RSIPF had achieved much progress by improving recruitment, training, operational response, and general duties policing across all provinces.

"The RSIPF Executive is confident we are better prepared to anticipate and quickly deal with similar crowd issues or major crimes in the future," he said.

"We have provided Public Order Management training to more than 800 RSIPF personnel throughout all Provinces and the RSIPF participates in regular joint exercises with the Participating Police Force and RAMSI military," Mr Kola said.

"The Police Response Team has grown from 12 to 32 officers and has been working successfully in crowd management at big events such as rugby and soccer games."

Mr Kola said a key achievement was that the RSIPF had increased its intelligence capability to monitor potential hotspots and detect new areas of potential threat, including civil unrest.

For example, the RSIPF 'Operation Parliament' is a combined policing response which incorporates intelligence and operational elements in planning and coordination for all sittings of Parliament.

"In addition, intelligence assessments of political activity include by-elections and operational planning for the coming 2010 Elections," he said.

The RSIPF plans more Public Order Management training in 2009-10 to form ready response groups sourced from all areas of the organisation. These extra training personnel would help assist with emergency call-outs beyond central Honiara.

Mr Kola acknowledged that the Solomon Islands was still in the early stages of rebuilding the RSIPF following the end of the Tensions in 2003.

"These riots in Honiara in April 2006, the acts of violence - people throwing rocks, arson and other damage in the Chinatown business district - shocked us all," he said.

"The fault for the riots lies only with those who broke the law," Acting Commissioner Kola said. "We await further debate by Parliament scheduled for the June sitting with strong interest and open hearts."

"For now, findings and recommendations which relate to the Royal Solomon Islands Police made in the Commission's report are being carefully reviewed by the RSIPF Executive so any of the shortcomings identified can be addressed," he said.

"The capabilities of the RSIPF are much improved but we are still developing the skills, experience, confidence and professionalism of our officers," Mr Kola said.

Mr Kola said RAMSI's partnership was helping the RSIPF in the long term job of rebuilding a professional Police force that the people can rely upon and trust to maintain law and order.

"We are grateful for the continued support from our Police colleagues of the 15 Pacific Nations involved in RAMSI. Their advice and help is highly valued," Mr Kola said.

"RSIPF officers now speak more openly with the PPF and RAMSI soldiers - working closely together and building understanding which helps us in a range of situations. We now confidently face many law and order issues together, working side-by-side."

Mr Kola said the RSIPF also appreciated the information, help and encouragement received from many people living in communities across the Solomon Islands.

"We need members of the public to continue to work closely with police to make our community safer. Less crime leads to social stability and a safer community for all," he said.