“RSIPF and CSSI Saved a lot of Lives," Minister of Police 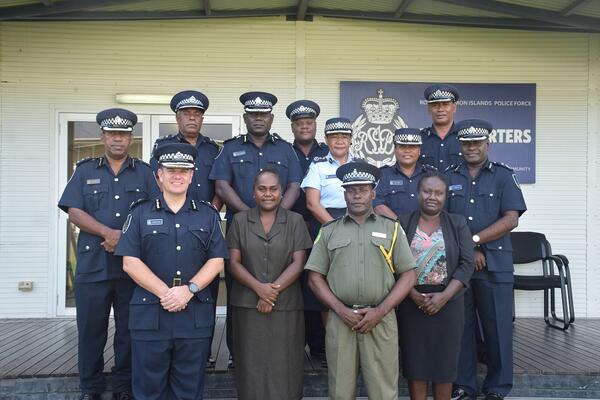 The new Minister of Police, National Security and Correctional Services, Hon. Lanelle Tanangada congratulates the Royal Solomon Islands Police Force (RSIPF) and the Correctional Services of Solomon Islands (CSSI) for saving a lot of lives and properties during the recent disturbances in Honiara following the election of the Prime Minister on 24 Apr

The Minister was officially welcomed at the Rove Police Headquarters today (10 May) with a joint parade by officers of the RSIPF and CSSI who took part in the National General Election (NGE) Operation which included the polling on 3 April and the election of the Prime Minister.

“As your substantive Minister, I would like to take this opportunity to acknowledge you all for your hard work, commitment and dedication that resulted in the successful conduct of the NGE and the election of the Prime Minister and formation of our new Government,” says Hon. Tanangada.

The Minister adds: “The recent tension days after the election of the Prime Minister have really strained your physical energies but you were able to save a lot of lives, women, men, youths and children and families from what could have resulted in massive casualties or damage to properties or government services as a whole.”

“I just admire the ongoing strength shown through your dedication and more so through the excellent leadership shown by Commissioner Varley and your team. There’s a lot of appreciation coming in from Parliamentarians, diplomats, social media and the general populous, especially since RAMSI’s withdrawal. This is a healthy sign of maturity by the RSIPF and CSSI in terms of your capabilities.”

“The capabilities of the RSIPF have stood the test of being able to gain the public’s confidence in the recent weeks. I can proudly say that the RSIPF and CSSI have courageously become a fully-fledged professional police force that has the confidence of the Solomon Islands community, to continue providing policing services and creating a joyful, peaceful, progressive and prosperous environment for the development of our beloved country,” Minister Tanangada emphasises.

She adds: “I am so proud of your excellent achievements and I know that even then a lot of more needs to be done behind the scene to restore law and order into our beloved country.”

“I wish to assure you all that as your new Minister I will render the needed support and assistance that you need to progress your roles and responsibilities.”