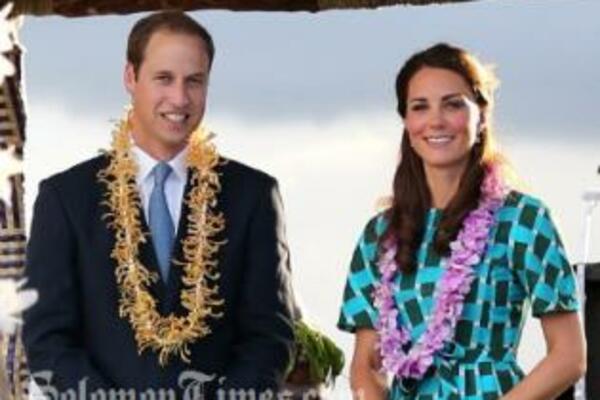 Thousands of screaming fans, who had lined the road since early afternoon, came out in droves to get a glimpse of the Royal duo as they rode past in the back of the travelling vehicle.
Source: telegraph.co.uk
Share
Monday, 17 September 2012 07:58 AM

The Duke and Duchess of Cambridge landed in the tiny country of Solomon Islands to thousands of fans who came out to greet them at the Henderson International Airport.

The charismatic Royal duo was greeted at the airport by the Solomon Islands Governor General, Sir Frank Kabui and Lady Kabui together with Prime Minister Gordon Darcy Lilo and Madam Lilo. Together they stood to watch the Parade by the Royal Solomon Islands Police and the Correctional Service officers.

After the formalities, the Royal Duke and Duchess of Cambridge climbed onto the back of the Tomoko like vehicle done up by the Ministry of Infrastructure to travel into town for the Ecumenical Service at the St. Barnabas Cathedral.

Thousands of screaming fans, who had lined the road since early afternoon, came out in droves to get a glimpse of the Royal duo as they rode past in the back of the travelling vehicle.

The line of fans began from Henderson Airport right into Honiara town. Because of the jam packed traffic, people were forced to walk to ensure they could at least get a glimpse of the couple in their next engagement. The two lane road into town turned into a three lane road, but the Royal Solomon Islands Police handled the jam-packed chaos with ease and everyone got along their way without a hitch.

"This is one opportunity of a lifetime! I love Prince William's mother and the does seem to have his mother's heart!," says an adoring fan, while waiting for the Royal drive by.

"Duchess of Cambridge is my favorite royal! She and Prince William seem so nice and down to earth! Today is a day I will never forget! A glimpse was enough for me," gushed another enthusiastic fan.

The Duke and Duchess of Cambridge will continue their tour today throughout Honiara on various engagements but the trip to Tavanipupu Resort will definitely be the icing on the cake.