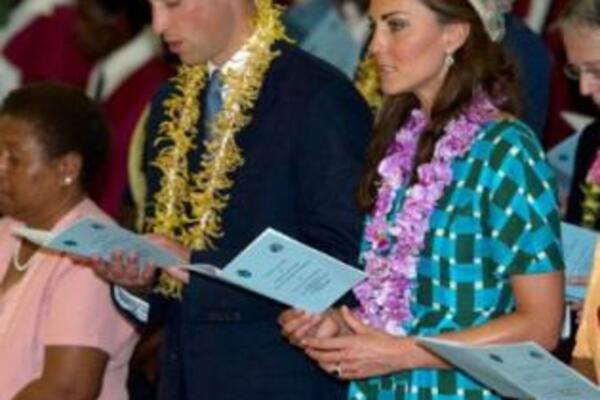 As they drew up to St Barnabas Cathedral, the noise was deafening, particularly as they dismounted from their ride.
Source: dailymail.co.uk
Share
Monday, 17 September 2012 09:16 AM

Garlanded with fragrant orchids and carried through the capital in a war canoe built on top of a van, the Duke and Duchess of Cambridge arrived in the Solomon Islands yesterday.

Having spent the last two days deep in the jungle on the island of Borneo, William and Kate had no idea of what to expect when they arrived in the tiny sovereign state east of Papua New Guinea - and it was unlikely that they would ever have guessed what greeted them.

As the couple stepped off their private jet at the capital, Honiara, they were greeted by a group of fearsome warriors dressed in raffia loin cloths and carrying spears, bows and musical instruments, shouting fearsome chants.

They laughed and smiled as they watched the men, only briefly bowing their heads to have sweet-smelling garlands placed around their necks.

Kate was wearing an £820 geometric patterned dress by Jonathan Saunders and a bespoke cocktail hat by Jane Taylor pinned to her curls at the back of her head as she was later attending church.

William inspected a guard of honour made up of the local police force, as the country does not have its own army.

This one had been built round a white Toyota mini man and consisted of a magnificent carved prow which had been decorates with sea shells and feathers. On its base was a small carved spirit holding a bird to ward away evil known as a nguzu nguzu

The canoe, which was made of rush matting, bamboo and sago palm leaves, should have had two seats inside but William and Kate insisted they wanted to stand, according to the man in charge, Henry Murray.

Mr Murray said; 'Although we live in a modern world now we should be proud of our old culture and show that we value our customs and traditions.'

Father Henry Teho, an Anglican priest who took part in the welcome ceremony, added: 'When you would have come to our place in the old times you would have been killed and eaten straight away. But not today of course.'

'The Tukawaka (welcome ceremony) is just to tell you that you are welcome here. Everyone here is looking forward to their visit very much particularly because of the fact that Prince William is the son of Princess Diana who is very much popular.'

The couple then took their places in the canoe for what has to be one of the most remarkable arrivals ever seen on a royal tour.

Almost the entire 70,000 strong population of Honiara had turned out to line the 8 kilometre route between Henderson Airport and the town centre, cheering, shouting and waving flags.

William and Kate looked genuinely shocked and touched by the welcome, although they giggled when the saw a tin house which had been grandly named Prince Phillip (sic) Highway Plaza.

As they drew up to St Barnabas Cathedral, the noise was deafening, particularly as they dismounted to be greeted by His Excellency the Governor General of the Solomon Islands, Sir Frank Kabui, the Archbishop of Melanesia, The Most Very Reverend David Vunagi and the Dean of the cathedral, Davidson Nwaeramo.

Later the couple attended a 'state banquet' in the form of a traditional Solomon Islands feast in the grounds of Government House.

Food is cooked on hot stones and the Duke is expected to deliver a message on behalf of the Queen, who is still head of state .

The Duchess looked somewhat hot and bothered by the time she arrived at St.Barnabas Cathedral for the six o'clock service, no doubt due to the oppressive humidity.

The Dean began prayers by thanking God for the safe arrival of the Duke and Duchess. Unfortunately the lights went out four times - three times during the Archbishop's sermon.

Clearly used to it, he ploughed on until he finished, then walked back to his throne and mopped his brow. Kate began to fan herself with a dark blue and cream plaited fan which was left for her on the front pew, along with a purple one for William.

She ran her fingers down her face, pushed back her hair and fanned madly throughout the service. William used his order of service book to fan himself too occasionally.

Kate and William both joined in the hymns singing lustily and both knelt for prayers, while most of the congregation sat.

The couple are due to spend the next two days on the Solomons, including a night on Tuvanipupupu island, described as one of the most romantic spots on earth.

'They feel it has been a great success so far and have thoroughly enjoyed the places they have visited and the people they have met.

'Even when they were reeling from the shock of what happened on Friday, their smiles were entirely genuine.

'They are determined to press ahead and that it should be business as usual.'

The couple have launched a legal action in the French courts against Closer magazine for what they described as a 'grotesque' and 'unjustifiable' breach of their privacy.