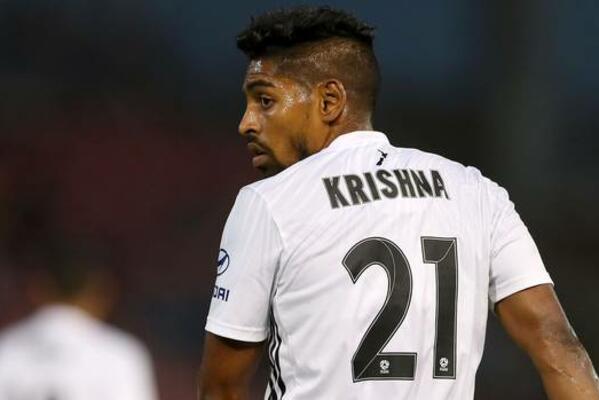 Krishna's legacy is that Pacific Islanders can succeed in the A-League.
Source: Getty Images
Share
Tuesday, 28 May 2019 12:07 PM

What Roy Krishna has done is staggering, consider the following statistics and accolades;

Krishna has gone from a shy 19-year-old, when he was first brought to New Zealand by Waitakere United in 2008 by Rex Dawkins, to the A-Leagues best player.

Krishna was first signed by the Wellington Phoenix as an injury replacement for club legend Paul Ifill in January 2014.

He's spent the past five years overtaking Ifill's club scoring record, growing from a shy but potentially brilliant player into a confident leader and consummate professional. And in 2018-19, he went from good to great as an A-League striker.

Challenged by Mark Rudan to change some off-field habits, tweak small yet crucial parts of his game and have his best season, Krishna delivered probably beyond even the wildest expectations of his coach.

But Krishna's legacy is that Pacific Islanders can succeed in the A-League. Despite his fame and success Krishna continues to argue that he is not the best player from his region or even his country.

Such humility speaks of Roy Krishna the individual. He recognizes the effort those around him have put over the years into making him a prolific striker at the A League.

While A-League scouts scour Europe, Asia and South America for imports to fill the five foreign spots on their rosters, Krishna is proof footballing riches can be found much closer to home. Maybe look to Solomon Islands and Fiji, rather than France and Spain?

Our brand of soccer is exciting to watch, perhaps more for individual talent rather than as a team unit. Our Head Coach Wim Rijsbergen is quite scathing in his assessment of our team’s performance in Netharlands – in a nutshell – he thinks there is too much dribbling in our game, and more needs to be done to recover when teams counter attack.

He is saying structured football means a lot more passing, and a lot less dribbling. It is playing as a single unit, moving with purpose – a clear plan. To him it does not matter how many goals the team scores, what matters is how those goals were scored. In the eyes of a professional what he looks for is structured football – the right system he calls it.

He has also taken aim at some of his players, saying some are behaving like super stars. Coming from a former professional soccer player it is probably a not so subtle warning to his players – stay humble. Krishna has stated time and again that he is not the best player in the region or his country – he is probably right. But his humility made him the best in the A-League, its an important virtue for those that want to succeed.

So, in summary, and feel free to disagree, our players need to harness their understanding of the game – the system or structure – because talent is already there. Players also need to stay humble, people will always go out of their way to help you succeed – because at the end of the day not all of us can bend it like Beckham.