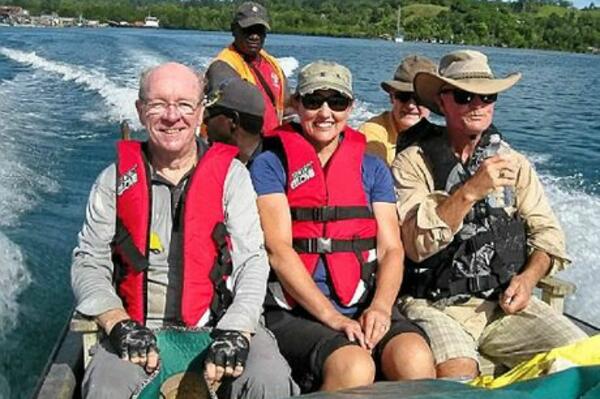 Most 68-year-olds would never consider travelling to a developing nation like Solomon Islands to build medical clinics and provide locals with access to water and sanitation.

But that is exactly what Leo Smith has been doing for the past five years.

The Rotary Club of Mooloolaba member has just returned from his seventh trip to the Solomon Islands to provide help to villages in remote areas. The 20-year veteran of Rotary said he got as much out of his humanitarian work as the islanders did.

"It is very rewarding," Mr Smith said. "It is a beautiful country. The people are nice. There is no industry, no pollution, a little bit of logging, but it is mainly just Mother Nature."

Mr Smith said that in the past five years Rotarians had had built several nurse aid post clinics on remote islands, installed water and sanitation for schools and aid posts and installed solar-powered iceboxes which are used to store vaccines.

"There is no power in the remote places," he said. "In the Solomon Islands, the government has funds to provide schools, but often insufficient funds for toilets or water. The government is very supportive of us coming in to help, as are the local people."

Mr Smith said there was a lot involved in the humanitarian project, including identifying projects in consultation with locals, raising money, finding volunteers and buying all the materials.

Raising awareness of the islanders' plight was a big part of keeping the long-term project ticking over.

"I go and talk to Rotary clubs to raise funds.

"I then use that money to apply to the Rotary Foundation in the United States for supporting grants. Volunteers pay their own expenses; flight, accommodation and food."

In August and October two teams of six volunteers will head to the area to carry out works on five islands which are home to 10 communities.