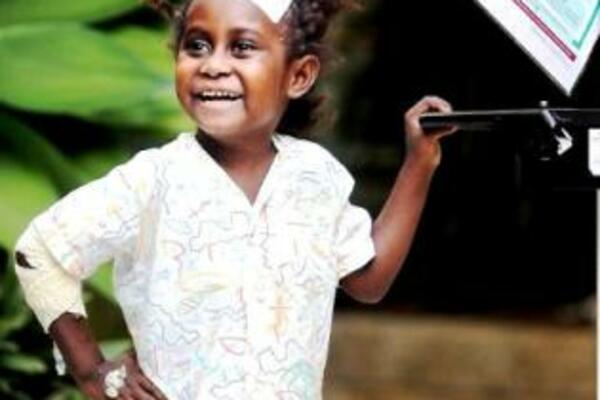 Larisha Barikoa faced almost certain death in a Solomon Islands hospital after a ladder fell on her head, causing a nail to penetrate her brain.

By the time she was flown to Brisbane four months later, the five-year-old from remote Choiseul Island was battling a severe brain infection.

Although her grandfather had removed the nail from her skull soon after the February accident, a huge abscess developed on the left side of her brain, she lost the ability to talk and became paralysed on her right side.

Royal Children's Hospital neurosurgical registrar Ashish Jonathan said Larisha would have eventually died in Honiara, the Solomon Islands' capital, to where she was flown from her remote village, about 500km away.

"Neurosurgical procedures are not something they can perform," he said. "They tried their best, but obviously medical services are limited there."

But Rotary Oceania Medical Aid for Children (ROMAC) stepped in, organising for Larisha and her aunt to fly to Brisbane for life-saving medical treatment.

Five weeks and three operations later, Larisha is thriving, a giggling bundle of energy with what Dr Jonathan describes as "the best hairstyle in the world".

The little girl, who had lost the ability to speak after the accident, is learning English, adding to her vocabulary every day.

Larisha Barikoa from the Solomon Islands at the RBCH after a nail pierced her brain. Pic: Annette Dew Source: The Courier-Mail

Neurosurgeon Gert Tollesson and Dr Jonathan operated on Larisha soon after she arrived in Brisbane on June 24, drilling into her skull and inserting a tube to start draining the abscess, then almost 6cm in diameter.

"The very next day, she started moving her right arm and she was talking and alert," Dr Jonathan said.

After two more surgeries, the abscess has shrunk to about a fifth of its original size. She will have a final operation later this week to remove the remains of the abscess before returning home.

Her Brisbane carer Denise Schellbach said ROMAC became involved in getting Larisha to Brisbane, and paying for her medical expenses after the Honiara Rotary Club learned of the little girl's case.