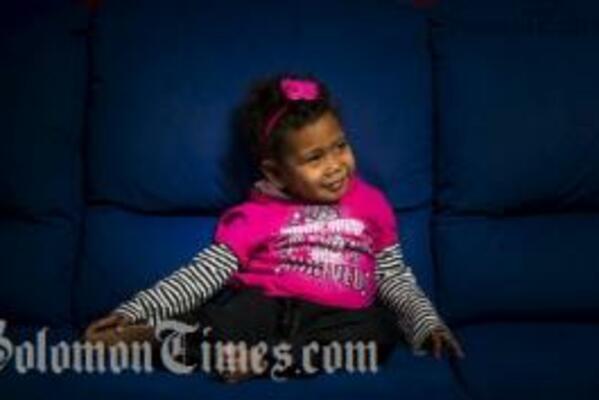 Juanita Augerea, 2, of the Solomon Islands, has received an operation on her kidney through the ROMAC (Rotary Oceania Medican Aid for Children) program.
Share
Monday, 13 August 2012 12:27 PM

With a shy smile and a pink bow in her hair there is no obvious sign that little Juanita Augerea has just been through a life-changing event, but the youngster has plenty of reasons for joy.

The 2½-year-old from the Solomon Islands was brought to Australia by Rotary Oceania Medical Aid for Children (ROMAC) for emergency scans and surgery at the Canberra Hospital, from which she has been recovering well.

The scans, which could not be performed at home, revealed that her right side kidney had stopped working and the left side one had become enlarged because it was trying to compensate.

Juanita's mother Carol Titiulu, who works as a paediatric doctor at a hospital in Honiara in the Solomon Islands, said she was very relieved that her daughter had been treated in Australia.
Advertisement

"At home we have limited services with our imaging - we don't have very advanced things," she said.

"My daughter had the normal X-ray and scan we can do at home and we could see there was no function on the right-side kidney and there was a problem with the left kidney."

"The scan in Australia showed the left kidney was [still] functioning. It was such a relief as a mother and as a doctor because you know things and it made me very scared at the beginning. I'm really relieved. I was really stressed out, I want to say thank you very much to ROMAC and the people of Australia for their kindness, not only for my child but on behalf of the Solomon Islands for all the children who are helped by ROMAC."

ROMAC chairwoman for the Canberra and surrounding NSW district, Sandra Mahlberg, said the surgery was performed by George Malecky at the Canberra Hospital, under an agreement struck between ROMAC and the ACT government.

"ACT Health provide [nearly] free medical treatment for four children per year and while we do pay a certain amount, it is nothing like the cost it would be," she said.

"We are very thankful to the ACT government. They are very compassionate to do this."