Risky But Worth It: The Challenges Of Women Empowerment in Rural Areas 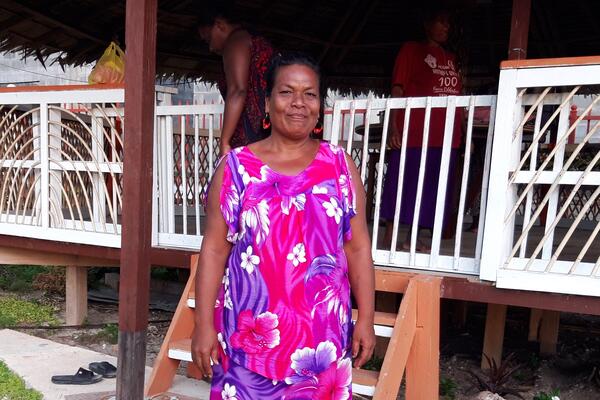 “Some of the women walk great distances to catch telecommunication signal. Most times I have a hard time getting the women via mobile phone so I have no choice but to get in the boat to go get them”.
Source: Georgina Kekea
By Georgina Kekea
Share
Thursday, 27 August 2020 10:12 AM

“Gathering rural women to participate in such a gathering or forum can be quite challenging”, says Jacinta.

Jacinta Sale is the Women’s Development Officer in the Central Provincial Government.

Today, she stands with pride as she watches the women from Savo, Russells and Gela participate in a three day forum held in Tulagi.

“I went and brought the women from Russells and Savo to this Forum”, Jacinta says.

The forum will be for three days, facilitated by the Women’s Rights Action Movement (WRAM).

While the women went about their session, Jacinta recalls the day she went to pick the women from their respective communities.

“You know how the weather used to change without warning, we were caught in a bad one on our way back from Russells”, Jacinta says.

The return trip from Tulagi to Russell, Savo and back should have happened in just a day. But for the group of women, this did not eventuate.

“We first landed at Moe Island on our way from Tulagi before going to Pavuvu and to other villages in Russell Island to pick up the other participants. But then on our way back to go to Savo, we met bad weather. So we decided to seek shelter on Moe Island where my husband is from”, Jacinta says.

Wet, tired and scared, the women (five of them) were forced to spend the night in Moe.

“We were told not to risk our lives by traveling in such weather. At least our aim was to get to Moe where I have family there”, Jacinta says.

The distance between Savo and Russell Islands is almost 70km. The people of the islands are quite used to inter-traveling. But on that particular day, the skipper (captain) of the boat told the women that they will not be able to cross over.

“It was raining; the waves and winds were quite strong. A few of the women nearly cried but we made it to Moe to seek shelter”, Jacinta recalls.

People usually get lost at sea during bad weather conditions in Solomon Islands. Sometimes it is because travellers do not have access to weather information or they are just ignorant of weather warnings and bad weather signs.

“But our skipper was a very good one. Usually when traveling to Russell Island, I will find the best skipper to get me there and back”, Jacinta says.

After spending the night in Moe, the travelers then left around 8 in the morning. Though the weather was not really 100 percent, the skipper said it was ok for them to go to Savo, pick the other three participants there before going back to Tulagi.

“So we arrived back in Tulagi before lunch time”, Jacinta says.

Asked if it is worth it risking their lives for such an occasion, Jacinta says yes.

“You know how funds are limited, when opportunities like this comes up, of course we will accept it. There is a lot of information that the women need to know to build their capacity.

"The main thing is that the women from rural areas are given the chance to enhance their knowledge and advance their skills in financial and leadership roles”, Jacinta says.

“Communication is one of the main challenges for us in the rural area."

Despite boasting a high percentage of mobile penetration by the telecommunication companies, people in rural communities still lack access to communication.

“Some of the women walk great distances to catch telecommunication signal. Most times I have a hard time getting the women via mobile phone so I have no choice but to get in the boat to go get them”.

Jacinta says she does not want the boat skipper to return without any of the participants so each time, despite the weather, she will have to personally go with the boat.

“The only means of transportation is by boat and it is quite expensive as we have to spend a lot of money on fuel. It would be such a waste of money should the driver return without any of the participants”.

But Jacinta says it is quite fulfilling to see the women participate in discussions with other women from the different villages. She says this is one way of empowering the women. The women were made to participate in a mapping exercise where they highlight milestones in their community this past decade.

The women also participated in topics on leadership and governance, mentoring, gender equality and economic empowerment.

Participants to the forum comes from the eight wards in Gela, five villages in Russell Islands and three villages in Savo.

“Naomi, president of the provincial council of women went to pick the other women from the eight wards on Gela”, Jacinta says.

Women representatives from the different agencies in Tulagi also attended the Forum.