Riots in Solomon Islands: The Day After 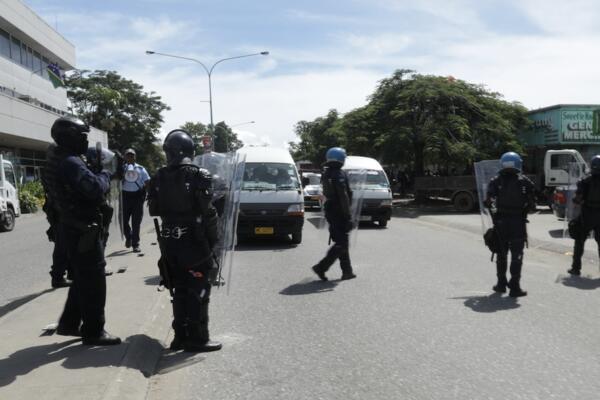 In the absence of influence over the political system, economy and employment, and with a degree of social support, men (who unlike women are socialized to fight) will turn to the last resort they have – their physical bodies and their physical ability to use violence.
Source: Sakwadi Media
By Dr Anouk Ride (AIIA)
Share
Monday, 29 April 2019 13:43 PM

Despite the country peacefully holding its first elections since the end of the regional assistance mission earlier this month, frustration with the political system has been fomenting for some time and the riots were targeted with political meaning.

However, while everyone points fingers at each other, it hides the fact that all these groups are connected to each other and the problem of the 2019 riots is less individual than systemic. As I have argued previously, riots in Solomon Islands are not “irrational” or “chaotic” behaviour. They arise at moments of key political transitions, they have specific targets, they enjoy a degree of social support and they serve a symbolic purpose.

In the case of the 2006 riots, the unrest grew from dissatisfaction at the election of a long-time politician to the position of prime minister. While Asian businesses dominate logging, mining and fishing industries, their dominance of the retail industry in Honiara provided a symbolic target to signal dissent over the political and foreign control of development. This morphed into the targeting of “new” Asian business outlets in Chinatown (the established businesses who had been in Solomon Islands for decades and had more entrenched relations with local people were spared looting and destruction of property). No lives were lost in Chinatown and as women and children waited outside shops to carry home looted goods, many participants had a sense of perverse justice in what had happened. A Parliamentary Commission of Inquiry tried to explain mass action in this case, stating that evidence of planning may be the wrong thing to look for in trying to establish responsibility for what happened: “Evidence points to a far more organic process in which commonalities are understood, and do not have to be articulated, or discussions on ways and means are kept to a minimum so that the action is in the hands of individuals, their ability to work as a team, and group cohesion.”

There was some sense of deja vu yesterday. Firstly, people had been expressing dissatisfaction with the idea of Sogavare taking a fourth term as prime minister for weeks leading up to the event but were not allowed to protest (as permission is required from the police commissioner). Secondly, since 2006 there has been a dramatic increase in the amount of land and business opportunities taken up by new Asian immigrants in Honiara, while opportunities for informal businesses and local employment have remained severely limited. Thirdly, the youth population has grown and is marginalised from politics with slim chances of employment.

Most “youth” stayed home yesterday and did not participate in the destruction of property. However, it is understandable that they feel excluded from state governance – while Solomon Islands has one of the youngest populations in the Pacific, public spending on employment and livelihood programs to occupy them is small. Provincial governments, the primary agent for youth policy implementation, are allocated just US $430-720 per year for youth activities, while the Youth Development Division of the Ministry of Women Youth Children and Family Affairs budget is approximately US $430,000 per year. In contrast, each member of parliament was allocated just under US $1 million in various constituency funds in 2016, which means the entire national annual budget for youth development was around half of the discretionary funding allocated to just one MP.

There were also rumours in the Chinese community that unrest might occur, and many closed the doors of their stores early. Most of the “new Chinese” in the retail sector are from southern China. However, recently the government has also allowed many Bangladeshi and other Southern Asian immigrants to run retail businesses in the outer suburbs of Honiara and the peri-urban areas of Guadalcanal. This has been creating local tensions and furthering anti-Asian sentiment across the city and peri-urban areas.

The unrest yesterday had a head, a tail and a trail to it. At the head of the groups were a number of people who initiated violence: they smashed the glass of cars, shops and hotels, and led the charge. At the tail of the groups were those who were not as violent but were following the head: they were curious, dawdling, taking photos for social media and making jokes. Then there was their trail: people who stood on the side of the road watching, some urged calm, some agreed with their sentiment and others were just curious to see what happened next. The head and tail did not disturb the trail, and apart from people taking advantage of the situation to get drunk and create a nuisance, or being exposed to police tear gas, most Honiara residents were unharmed by the unrest. Thousands of men, women and children from all across Honiara just had a look at what was happening and walked home, as roads were blocked and buses stopped operating.

The protesters and rioters had a general plan – to converge on Pacific Casino Hotel where Prime Minister Sogavare and his coalition had been meeting to take “roll calls” of their members and plan their ascent to power. After marching to the parliament and finding no one to listen to their protest except a line of police, the group moved quickly to the Casino Hotel. However, as the day progressed, and more people came out of some of the disadvantaged settlements of Honiara, “new Chinese” buildings were again targeted – the Capital Park building and new Henderson Plaza (both built with profits from Asian logging businesses) – plus the Oceanic Marine building (their business being previously embroiled in controversy over misuse of government funds for shipping). The Royal Solomon Islands Police Force found it hard to respond to these different sites erupting at the same time, having successfully quelled problems in the central business district and Chinatown relatively well and quickly, but not being prepared for its spread to the east of the city.

Unlike 2006, unrest was not confined to Chinatown. Simply because Chinatown is no longer the only symbol of foreign control of industry and land. The growing population of East Honiara, including many informal settlements, have watched while foreign enterprises have expanded retail businesses all along the main road and also taken up most of the valuable land behind it for residences, logging operation bases and warehouses. This expansion has been supported by systemic corruption: in the ministries of land and immigration; in the intertwining of loggers and politicians in allegiances to expand their economic and political power; and, in the lack of investment by the development sector in transparency and accountability when it comes to urban planning and land use. Throughout this has been the rise of educated “brokers” who often subvert local leaders, exclude women from decision-making about land ownership, use and rent, and who sideline indigenous owners of Guadalcanal in decisions regarding land in Honiara and the peri-urban areas. Support from the former Regional Assistance Mission to Solomon Islands focused more on policing, justice and finance. More or less leaving the issues of corruption in immigration and land, youth unemployment, informal settlements, dissent about the political elite and tensions between indigenous and immigrants to grow and fester without any circuit-breakers other than the courts. There have been no attempts at peaceful conflict resolution between those against the decision on the prime minister and those now in power. Although civil society has brokered dialogues in the past, there was little happening in recent weeks to establish dialogue and fix fractured relations between both sides of politics or between politicians and the masses.

In the absence of influence over the political system, economy and employment, and with a degree of social support, men (who unlike women are socialised to fight) will turn to the last resort they have – their physical bodies and their physical ability to use violence. As Lewis Coser argued in an early analysis of why people engage in urban riots, rioting behaviour tends to be selective of targets for violence, perpetrated by groups that have little faith in existing institutions and intended to signal that aggrieved groups “really mean it.” Yesterday they certainly meant it on the streets of Honiara. It was not random violence but targeted with a political meaning. Today the question is who is listening?