Riots and Covid-19 Have Led to Serious Economic Losses 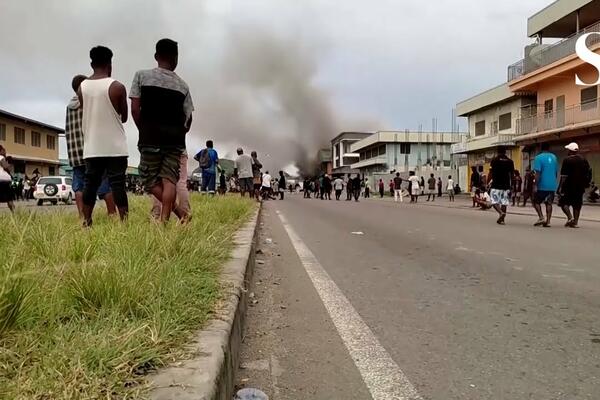 The riots in November 2021 has compounded an already weakening financial position of the government caused by the pandemic.
Source: The Straits Times
By Samson Sade
Share
Tuesday, 22 February 2022 13:04 PM

The man-made disaster of November 2021 was further compounded in January when community transmission of the deadly Coronavirus was first detected.

The statement was made by Prime Minister Manasseh Sogavare during his nationwide address on February 18th, 2022.

The statement was an apparent reference to the looting and burning down of China Town following the riot in November of last year and the economic downfall that ensues.

“This has necessitated some re-adjustments to our policies,” he said.

The PM assures the public that Caucus has resumed meetings for the first time since the community transmission and has discussed the policy shift.

“Fellow Solomon Islanders, the effect of the community transmission on our economy is also substantial.

“Lockdowns, curfews, and restrictions on movements of people within Honiara and between our islands continue to negatively impact our economy,” Mr. Sogavare said.

The PM went on to say that the current Covid-19 outbreak, including recent and potential future lockdowns pose continuing challenges to the government’s fiscal position and the economy more generally.

He mentioned that the Economic Reform Unit (ERU) estimates that the lockdown periods enforced in January cost the government between SBD$70 to 80 million dollars in foregone revenue.

“Broadly in line with these estimates, preliminary findings by the Central Bank of Solomon Islands (CBSI) showed that the direct loss in tax revenue during the most recent lockdown (January 25 – 30) averaged around SBD$10.6 million a day.

He further said that during the January lockdown, CBSI witnessed a sharp contraction across all sectors most notably the service sector which experienced a loss of SBD$13 million per day with significant fall in the retail and wholesale, public administration and transportation sectors.

Mr Sogavare also mentioned that the second largest sector to be badly hit is the manufacturing which experienced an estimated daily loss of around SBD$8 million.

“The Agriculture sector lost an estimated SBD$4 million a day due mainly to a sharp drop in the forestry sub-sector.

“Lastly, the immediate knock-on-loss effect in other provinces was estimated at around SBD$10 million, in line with supply chain disruptions,” the PM said.

However, the PM admitted that whilst the measures are necessary, they are on the other hand not sustainable especially in a small economy like ours.

He said that the fact that supply chains have been disrupted and the workforce badly affected had resulted in the slowing down of the economy.

The PM however assured the nation that his government is focused on mitigating and managing this crisis whilst at the same time resuscitating and growing the economy.