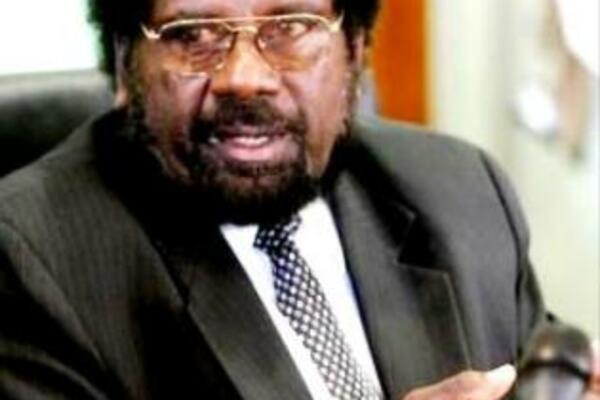 It is understood that the Opposition side is looking at a possibility of a motion of no confidence based on their current numerical strength.
Source: STO Archives
Share
Monday, 30 August 2010 08:56 AM

Just days after winning the majority to form government, the Philip led government has suffered a blow with Snyder Rini choosing to switch his allegiance to the Opposition group.

It is believed that a tussle between two government MPs over the Finance and Treasury ministerial portfolio has resulted in Mr Rini's decision to switch camp.

Member of Parliament for Marovo, Snyder Rini is said to have been unhappy when he was not given the Finance and Treasury portfolio. MP for Gizo-Kolombangara Gordon Darcy Lilo was given the nod ahead of Mr Rini.

Speculations of his switch became rife when the Finance and Treasury portfolio was left vacant as Prime Minister Danny Phillip organized his Cabinet last Friday. It was alleged that he was undecided earlier on as to who to he should assign the key ministry to. It is understood that Mr Rini had given strong indication of his interest to the Prime Minister.

Two other Ministry's were also left vacant - the Police and National Security portfolio and the Ministry of National Planning and Aid Coordination.

Rini's switch has now left the government coalition with twenty four MPs, while the Opposition has increased its side to twenty five. It is understood that the Opposition side is looking at a possibility of a motion of no confidence based on their current numerical strength. The possible line of argument would be that the Philip led government does not have the numbers to govern.

However speculations are also rife that some members of the Opposition bench have also switched to the government side, although it is difficult to verify.

It is still unknown if the Marovo MP switched to the Opposition camp with or without terms and conditions.