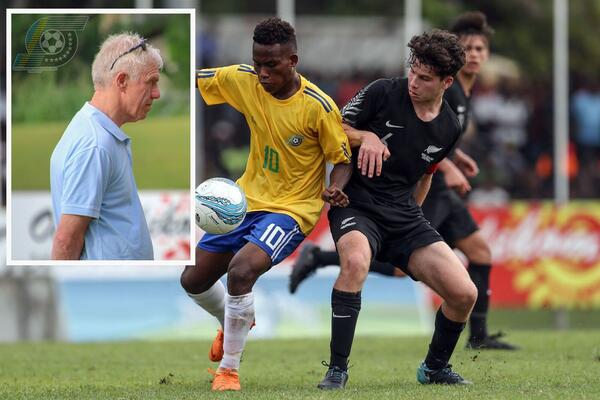 “I never watch this exciting kid play before but from what I have seen on videos he is a great young talent,” he said.
Source: SIFF
Share
Thursday, 09 May 2019 08:32 AM

Solomon Islands national team coach Wim Rijsbergen has indicated his interest of calling up Raphael Leai’i into the national team for the Netherlands camp this month.

The Dutchman had a brief stay in the country to select his 23 travelling squad before leaving on Tuesday (yesterday) back to the Netherlands.

Based on what he sees, there is a lack of good central strikers in the country apart from veteran Benjamin Totori.

Therefore, Rijsbergen is keen to call up the Solomon Islands wonder-kid into the fold.

“I never watch this exciting kid play before but from what I have seen on videos he is a great young talent,” he said.

“He has pace and an eye for goal which is needed from a clinical striker.

“Calling him up to the national team will help his development and an opportunity to see how he gels with the senior team.

“Also, he could learn from experienced players like Totori who has the last chance to win something before calling it a day.”

Lea’i has continued his stunning form for the national U17s in the recent UEFA International Development tournament where finished as the top scorer.

Meanwhile, SIFF is requesting the young lad’s release from his college and Wellington Phoenix academy to find if he is available for Netherlands training camp.

The national side is scheduled to depart next week on Monday 13 May 2019 for the Netherlands camp as part of the preparation for the South Pacific Games in July.