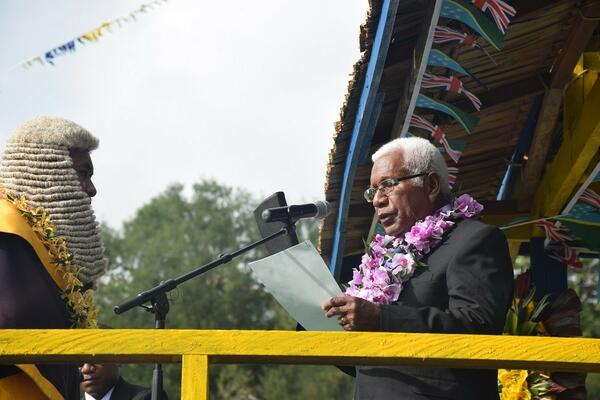 Right Reverend David Vunagi will become the country’s seventh Head of State, and the first from Isabel Province to hold the position.
Source: Supplied
Share
Tuesday, 09 July 2019 09:07 AM

The Governor General Elect, Right Reverend David Vunagi, has officially taken up his role as Governor General after being sworn in by Chief Justice Sir Albert Palmer at the Lawson Tama stadium during celebrations to mark the country’s 41st Independence Anniversary.

Right Reverend David Vunagi was Archbishop of Melanesia from 2009 until his retirement in 2016. He returned to his village on the island of Isabel. He was later appointed Principal of Selwyn College, a position he held until his election as Governor General.

Right Reverend David Vunagi will become the country’s seventh Head of State, and the first from Isabel Province to hold the position.

The Governor General is elected by the state’s National Parliament as the Queen’s personal representative on the islands. The role is largely ceremonial, but the post holder does retain some reserved powers.